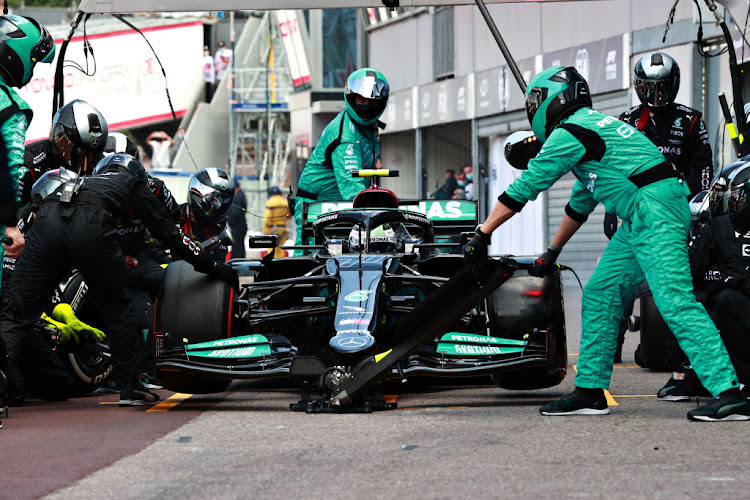 Valtteri Bottas of Finland makes a pitstop but his front right wheel is stuck on his car leading to his retirement from the race during the F1 Grand Prix of Monaco on May 23 2021.
Image: Mark Thompson/Getty Images

Formula One champions Mercedes had still to remove a stuck wheel from Valtteri Bottas's car on Monday, a day after the problem forced the Finn out of the Monaco Grand Prix.

Bottas pitted from second place on lap 29 but watched in dismay as time ticked away while mechanics struggled and failed to remove the front right wheel.

The retirement cost Mercedes precious points, with seven-times world champion Lewis Hamilton struggling in seventh, and led to the team losing their lead in the constructors' standings to Red Bull.

“We need to learn so it never happens again. It was bad luck from my side, and as a team it will be a priority for us to improve our pit stops,” said Bottas. “There's no-one to blame, as a team we just need to be better.”

Technical director James Allison said the wheel nut had been damaged by the wheel gun, machined to the point where there was nothing left to get a grip on.

A team spokesperson said the car was expected back at the factory on Tuesday, when the wheel would be removed and properly analysed.

“We need to review the design, we need to review the material of our wheel nut because the mechanics that operate the wheel nut need to do it in a way that you can't machine it off,” he told reporters. “As a matter of fact the mechanic that did that is one of the best, one of the fittest in terms of pit stop speed that the team has. It is never someone's fault. It's always multifaceted.”

Chase Elliott solidified his reputation as the king of the road courses on Sunday by winning the rain-shortened EchoPark Automotive Texas Grand Prix ...
Motoring
7 months ago

Lewis Hamilton and Mercedes lost their Formula One championship leads at the Monaco Grand Prix on Sunday, but the sport's most successful driver said ...
Motoring
7 months ago