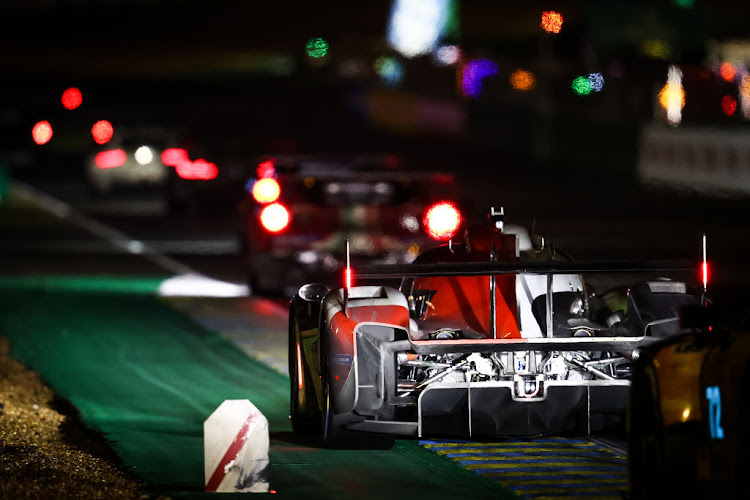 Champions Toyota settled into a one-two lead in the Le Mans 24 Hours with a third of the distance gone after a wet start and plenty of spins and collisions around the slippery Sarthe circuit on Saturday.

The number seven Toyota GR010 hybrid Hypercar of Britain's Mike Conway, Japan's Kamui Kobayashi and Argentine Jose Maria Lopez led the eight car through the night by nearly a minute and a half.

Conway had taken the first stint at the wheel, leading the field from pole position after two extra formation laps behind the safety car at the start.

The number eight Toyota driven by Switzerland's Sebastien Buemi, Japan's Kazuki Nakajima and New Zealander Brendon Hartley had an early spin after being shunted from behind by Frenchman Olivier Pla in the number 708 Glickenhaus.

Pla was handed a 10-second penalty for the collision, with Buemi continuing after briefly stopping by the side of the track.

The number eight car has won the Le Mans overall title for the past three years.

Spaniard Fernando Alonso, winner of two of those races and now back in Formula One with Renault-owned Alpine, was watching as a spectator after earlier performing a demonstration lap in an F1 car.

Alpine's number 36 car ran second in the opening laps until Nicolas Lapierre spun at Indianapolis, with the 709 Glickenhaus moving up before also spinning and opening the door for Portugal's Antonio Felix da Costa in the LMP2 JOTA entry.

The eight Toyota moved back into second place after 90 minutes and stayed there, trading the lead with the seven at pit stops.

The 708 Glickenhau moved up to third overall when Matthieu Vaxiviere spun the Alpine into the gravel at the first Mulsanne chicane and had to be towed out.

The rain came back after six hours and the safety car was again deployed due to several accidents.

Germany's Sophia Floersch, in the all-female Richard Mille car, was taken to the medical centre for precautionary checks after the car was retired but was reported unhurt.

The number seven Toyota, with Japan's Kamui Kobayashi and Argentine Jose Maria Lopez teamed up with Conway, has yet to win Le Mans after four poles from the last five races but is hoping to shrug off the jinx in the new Hypercar era.

The 61 cars in the 89th edition of the endurance race were flagged away by Ferrari chair John Elkann, the official starter waving the French tricolour.

Champions Toyota led one-two after the first two hours of a wet Le Mans 24 Hours on Saturday with plenty of spins and collisions around the slippery ...
Motoring
11 months ago

The World Endurance Championship (WEC) and its Le Mans 24 Hours showcase will switch in 2022 to a 100% renewable fuel derived partly from French wine ...
Motoring
11 months ago

Kamui Kobayashi put Toyota's number seven car on pole position for the 24 Hours of Le Mans on Thursday, with the Japanese driver hoping to finally ...
Motoring
11 months ago