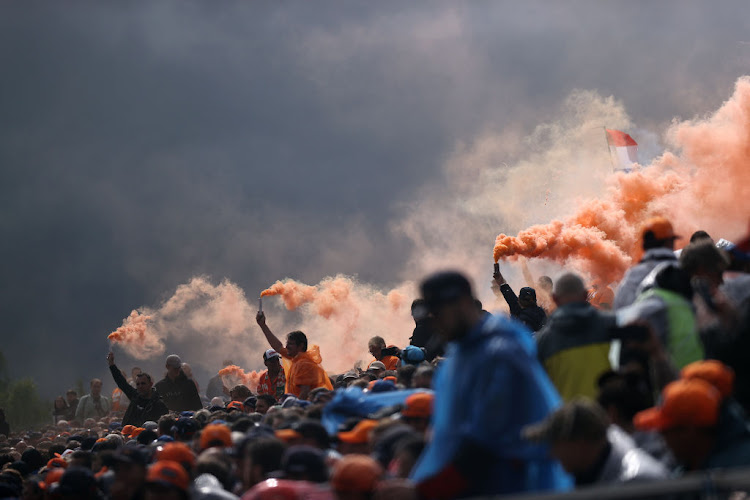 The Orange Army will be out in force to support Max Verstappen at the Dutch F1 Grand Prix.
Image: Lars Baron/Getty Images

Formula One needs to put on a show for the fans after a farcical 'race' in Belgium and it will not take long for Dutch fans and Max Verstappen's Orange Army to get the party started at Zandvoort on Sunday.

Tickets for the first Dutch Grand Prix in 36 years have been snapped up in the rush to see Red Bull's exciting young title contender race for the first time on home soil as a Formula One driver.

The race's return was postponed last year due to the Covid-19 pandemic but is going ahead this time with around 70,000 daily spectators sure to make their voices heard.

The old-school circuit in the dunes of the beach resort, a short journey from Amsterdam, will be just the place for the 23-year-old Verstappen to wrest the championship lead from Mercedes' Lewis Hamilton.

Verstappen has six victories to his credit from 12 races but is still three points adrift of the seven-time world champion, who will be venturing deep into hostile territory in search of a record-extending 100th career win.

Verstappen's win at Spa-Francorchamps was not one to celebrate, coming after a couple of laps in atrocious, wet conditions behind the safety car and the race declared, but Zandvoort will be very special.

“It was amazing to see so many fans supporting us in Austria and Belgium and I hope we can put on a good show for everyone in the grandstands this weekend,” said Verstappen.

“As for the track, it might be a little hard to overtake on but for single-lap performance I think it’s going to be rewarding.

“The qualifying laps will be very quick there so any mistakes will be really costly.”

The undulating track, with banked corners, has short straights and limited overtaking opportunities but it could throw up some surprises with most drivers having no more experience of it than in the simulator.

Mercedes boss Toto Wolff, whose team led both championships but with Red Bull closing the gap, looked forward to moving on from a miserable weekend and fighting for a proper victory.

“We're relishing the challenge of tackling a new track because it is new for everyone and that means fresh opportunities to find advantage,” he said.

“We'll be looking to hit the ground running on Friday and take the fight to our competitors. It will be exciting to see who comes out on top.”

The last winner in the Netherlands was Austria's late triple champion Niki Lauda in a McLaren one-two with Frenchman Alain Prost.

While the battle looks likely to be between the two title contenders, McLaren's Lando Norris will want to make amends after crashing in Belgian qualifying while setting the pace initially.

“Zandvoort is a cool circuit and one that I've raced, and won, at before, back in 2017 in Formula Three,” he said. “The track has changed quite a bit since then, with new banking, which could change how the race plays out.”

Formula One said on Wednesday it was looking into various options with the Belgian Grand Prix promoter after calls for fans to be refunded for last ...
Motoring
3 weeks ago

Renault-owned Alpine could one day help Fernando Alonso achieve his dream of winning the Indianapolis 500 to complete the Triple Crown of Motorsport, ...
Motoring
3 weeks ago