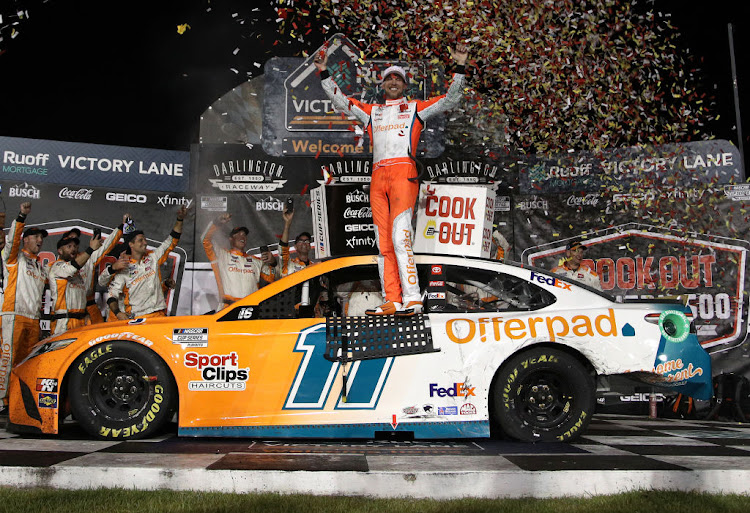 Denny Hamlin has done about everything in the 2021 NASCAR Cup Series season except win a race. He remedied that on Sunday night when he captured the Cook Out Southern 500 at Darlington Raceway.

That victory came at the right time, too, as it happened in the first race of the 10-race, 16-driver playoffs. That's big as it secures the Joe Gibbs Racing driver a berth in the second round of the playoffs.

"It's a matter of time," Hamlin said.

"We can't keep leading every time with 10 laps to go and not get a win. I couldn't be happier with this win, and now we're in the Round of 12."

To get the victory, Hamlin, who spent most of the season as the Cup points leader, had to hold off Kyle Larson, a five-race winner this season and the man who took the points lead from Hamlin four weeks ago.

The victory was Hamlin's fourth at the Darlington oval and 45th of his career. He led 146 laps.

Hendrick Motorsport's Larson, like Hamlin a playoffs driver, finished second after leading 156 laps — 0.2 seconds behind after taking a few banzai shots at Hamlin's rear bumper on the final lap.

"He drove it in past the level of the cars and tires," Hamlin said of the final lap and a move that saw Larson bash into Hamlin's bumper.

"I knew he was coming. I was a little concerned with that last lap because I knew I had about a four car length lead. I didn't think he was going to go that deep but still a great race.

"He was going to have to go through me."

Said Larson: "I was like, well, I haven't been able to gain on him, now I'm going to try something. Obviously got to his bumper too quick. I thought he was going to run that (lower) line to be safe and I could squirt to his outside but gave everything I had.

"I didn't want to wreck him. Just try to get to his outside there. He did a great job not making any mistakes that last run."

Ross Chastain of Chip Ganassi Racing, a non-playoffs driver who was looking for his first-ever Cup win, was third.

"I can go fast, but I couldn't quite race with them in my starts and my restarts," Chastain said.

"Got some work to do there. I need to clean up a few things."

Playoff contender Martin Truex Jnr of the Gibbs team finished fourth despite being penalised for speeding late in the race.

Fifth was contender Kevin Harvick of Stewart-Haas Racing, who was looking for his first victory of the season after winning nine a year ago.

Other playoffs drivers who finished in the top 10 were Kurt Busch, Brad Keselowski and Joey Logano, who were sixth, seventh and eighth, respectively.

Four playoffs drivers did not finish because of wrecks.

The first of those to exit was Daytona 500 winner Michael McDowell, who got loose and slammed the wall on Lap 30.

Kyle Busch was the next playoffs driver to head to the garages as he tangled with Austin Dillon just after the start of stage 2. Busch whacked the wall, and his night was over.

William Byron of Hendrick Motorsports was next to DNF. On Lap 200, he suffered a tyre problem, slammed the wall and was out of the race. He was running seventh at the time.

"I think, even with all the (earlier) right rear damage and it's just terrible. I don't know. That sucks."

The fourth playoff driver to crash out was Hendrick's Chase Elliott, the defending series champion. He blew a tyre with 41 laps to go and pounded the wall.

Hendrick's Alex Bowman slapped the wall early in the race and never recovered. He finished the race four laps off the pace.

The second race of the three-race Round of 16 playoffs is scheduled for next Saturday night at Richmond Raceway in Virginia.

Max Verstappen won his home Dutch Grand Prix for Red Bull on Sunday and took the Formula One championship lead in front of a roaring, dancing army of ...
Motoring
2 weeks ago