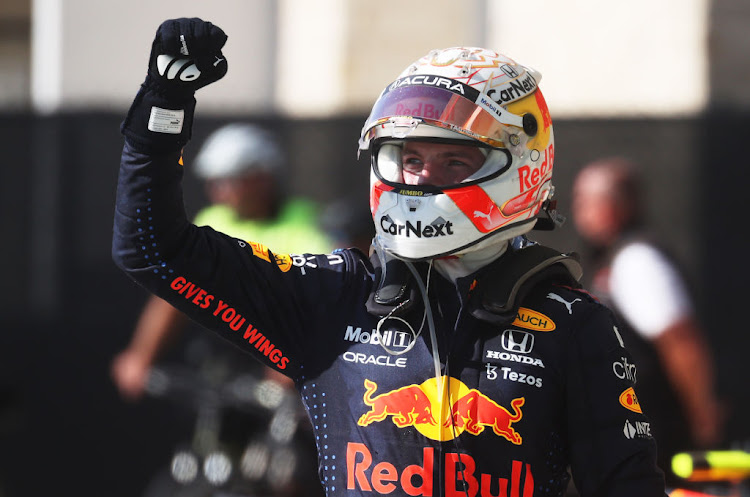 Max Verstappen celebrates in parc ferme after winning the F1 Grand Prix of USA at Circuit of The Americas on October 24, 2021 in Austin, Texas.
Image: Chris Graythen/Getty Images

One retirement could change everything but the statistics are stacking up for Red Bull's Max Verstappen as he seeks to deny Lewis Hamilton a record eighth Formula One championship this season.

Sunday's US Grand Prix victory at Austin's Circuit of the Americas was the 24-year-old Dutch driver's eighth from 17 of 22 races, compared to five for Mercedes' seven-time world champion.

Seasons have more races now but only once in the 70-year history of the championship has anyone won eight times and not ended up as champion.

That exception was Hamilton, who won 10 times in 2016 but lost out to German team mate Nico Rosberg after a down-to-the-wire battle.

Austin also saw Verstappen extend a record that may not be his for long.

No other driver has ever had so many career wins without winning a title, Verstappen's 18 well ahead of late British great Stirling Moss's 16.

With five races remaining, Hamilton cannot match his 2020, 2019 and 2018 tallies of 11 wins and the Briton will struggle to match even his worst of the Mercedes-dominated V6 turbo hybrid era — nine in 2017.

Verstappen can still equal the record held jointly by Michael Schumacher (2004) and Sebastian Vettel (2013) of 13 wins in a season.

The youngster is ahead of Hamilton 9-3 on pole positions and 13-12 on podium finishes, with the Briton ahead 5-4 on fastest laps.

“Although Lewis has the experience of already winning world titles, I don't really see that as an advantage now,” Australian Daniel Ricciardo said in talking about former team mate Verstappen's maturity.

“I do think Max is capable of it, he's got a pretty stable head on his shoulders now and he's proven that with some of the drives he's done this year.”

If more omens are required, Hamilton has never won the title when not leading the championship going into Austin, a circuit where he had won five times in eight years and clinched two crowns.

This year he was six points behind Verstappen, a gap now extended to 12.

“I would never declare this a foregone conclusion at this stage of the season,” 1996 champion Damon Hill told Sky Sports television on Monday.

“There's so many mishaps that happen in our sport and 25 points on the table for a victory but nothing if you don't finish, and that can obviously happen.

“He (Hamilton) really has to start winning again. It's eight versus five in victories to Max, so it is looking like it's Max's title at the moment.”

The next two races are in Mexico and Brazil, both seen as favouring Red Bull, before a Middle East triple in Qatar, Saudi Arabia and Abu Dhabi.

Qatar and Saudi are floodlit night races new to the calendar.

It feels like the US has accepted F1, says Hamilton

Lewis Hamilton had to settle for second but Formula One's most successful driver said Sunday's US Grand Prix in Austin still felt like a breakthrough ...
Motoring
6 months ago

Mercedes would not rule out Formula One title contender Lewis Hamilton taking another engine penalty this season after team mate Valtteri Bottas ...
Motoring
6 months ago

Hamilton wants F1 return to Africa as well as US expansion