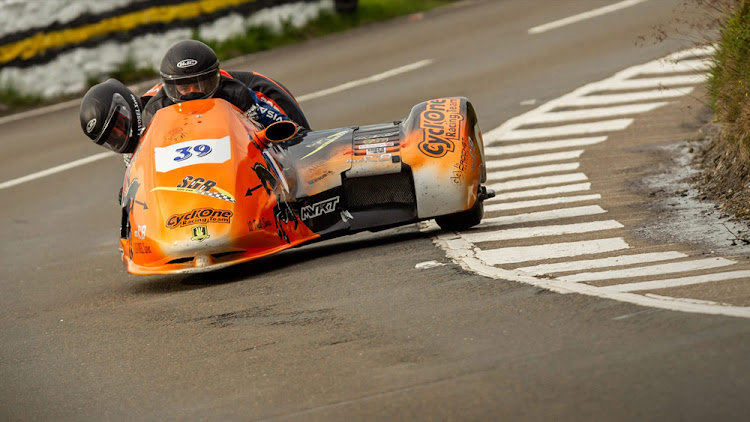 French sidecar passenger Olivier Lavorel, rear, died on Saturday of injuries suffered in a crash at the Isle of Man TT.
Image: Supplied

French sidecar passenger Olivier Lavorel died on Saturday of injuries suffered in a crash at the Isle of Man TT races, becoming the second fatality at this year's event.

Organisers said the 35-year-old from Sillingy was killed in an accident at Ago's Leap early in the opening lap of the first sidecar race.

The race was stopped and not restarted.

He was competing in the TT races for the first time as a passenger to compatriot Cesar Chanel, who was airlifted to hospital in Liverpool in a critical condition.

British Supersport rider Mark Purslow, 29, died in TT qualifying on Wednesday after an accident at Ballagarey.

The races around the island off the north-west coast of England are being held again after a two-year absence due to the Covid-19 pandemic, the longest break for the event since World War 2.

They have been run since 1907 and rank among the most dangerous in motorsport, with 262 fatalities to date in events including the Manx Grand Prix and Classic TT held on the road course.

World championship leader Fabio Quartararo extended his lead in the standings with a dominant victory at the Catalunya Grand Prix on Sunday as home ...
Motoring
1 month ago

Six-time MotoGP world champion Marc Marquez has undergone a successful fourth operation on his arm as the Spaniard targets a return in the 2023 ...
Motoring
1 month ago