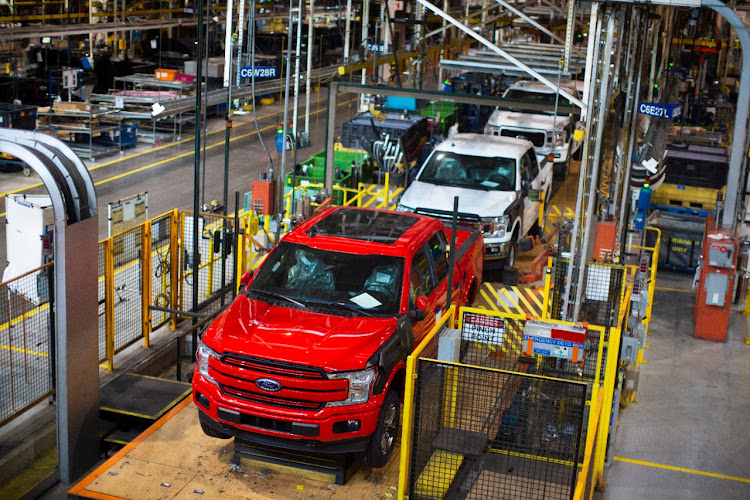 Thanks to the ongoing global chip shortage Ford has been forced at times to idle production of its top-selling F-150 full-size pickup.
Image: Supplied

Ford Motor Co on Wednesday outlined another series of plant shutdowns due to the global semiconductor chip shortage, with five facilities in the US and one in Turkey affected.

The No. 2 US automaker did not outline how many vehicles would be lost in the latest actions, and reiterated it intends to provide an update on the financial impact of the chip shortage with its quarterly earnings on April 28, suggesting the hit could be bigger than initially forecast.

Ford said in March it expected the semiconductor shortage to cost between $1bn and $2.5bn (roughly between R14.4bn and R36bn) While the company has prioritised chips for its highest-profit vehicles, it has been forced at times to idle production of its top-selling F-150 full-size pickup, and it has parked some of those trucks for final assembly later when enough chips are in hand.

The Dearborn, Michigan-based company this month announced production cuts during the weeks of April 19 and 26 at plants in Chicago, Flat Rock, Michigan, and Kansas City, as well as implementing a reduced schedule at its Ohio Assembly Plant, the latest in a string of chip-related curtailments.

It also set downtime for its Louisville, Kentucky, truck plant for the weeks of April 26 and May 3, and its van plant in Golcuk, Turkey, from May 8 to May 31. However, Ford hopes to offset some of the losses in Turkey by pulling forward downtime scheduled later in the year.

Semiconductors are used extensively in cars, including to monitor engine performance, manage steering or automatic windows, and in sensors used in parking and entertainment systems.

Ford said in addition to the chip shortage, other factors driving the shutdowns included the previously reported fire at Renesas Electronics Corp's chip-making factory in Japan and prior severe winter storms in Texas.

Industry research firm AutoForecast Solutions estimated lost production of almost 408,000 vehicles for Ford due to the shortage, with Wednesday's actions accounting for more than 91,300 of that total.

Also on Wednesday, Japan's Nissan Motor Co announced downtime in April for its plants in Smyrna, Tennessee; Canton, Mississippi, and Aguascalientes, Mexico, due to the shortage.

Japan's Honda Motor Co said it may cut production at some of its North American plants the week of April 19 due to the chip shortage and other factors, calling the situation “fluid”. German automaker Volkswagen AG idled production of its Tiguan crossover vehicle at its Puebla, Mexico, plant on Wednesday and Thursday.

Industry officials have previously said the shortage would be worse in the second quarter than the first. Ford's larger US rival, General Motors Co, previously said it expected the financial impact of the chip shortage to shave as much as $2bn (roughly R28.8bn) from profit.

It was not clear if chip supplies will recover in the third quarter and whether automakers can make up all the lost production later this year.

Many North American automakers cancelled chip orders after plants were shut for two months during the Covid-19 pandemic last year, while demand surged from the consumer electronics industry as people worked from home and played video games.

That has now left car makers competing for chips.

Providing cheaper fuels to SA citizens will not happen with the flick of switch but will require a multi-faceted, multi-departmental approach with ...
Motoring
1 month ago

Ford said on Wednesday it will start putting its hands-free highway driving technology in some of its pickup truck and Mustang models later this year.
Motoring
1 month ago