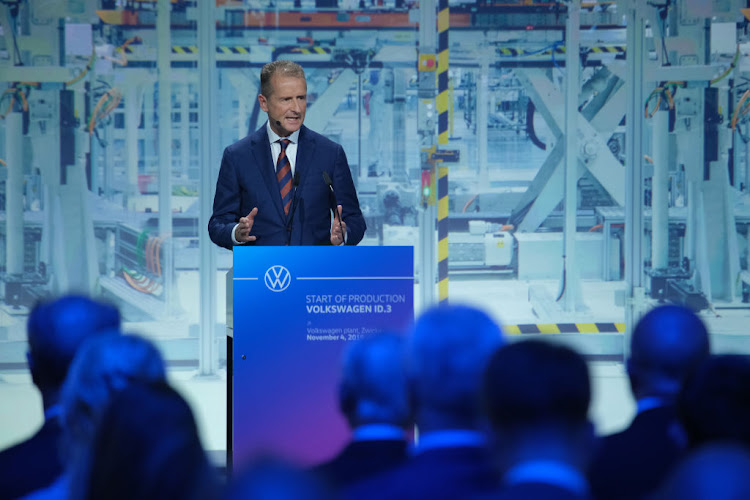 Herbert Diess will stay on as the CEO of Volkswagen AG.
Image: Sean Gallup/Getty Images

Volkswagen CEO Herbert Diess will stay on with rejigged responsibilities, the car maker said on Thursday, ending weeks of uncertainty about his future amid conflict with unions as the company ratcheted up spending plans on electric cars.

Ralf Brandstaetter, who took over from Diess as head of the core Volkswagen brand last year, will join the board and lead a new division named Volkswagen Passenger Cars from January 1, the company said in a statement.

He will also take over Volkswagen's China business from Diess from August 1. However, Diess will take on responsibility for the company's software unit Cariad, which bears a key function in the company's transformation efforts.

“I cannot complain about a lack of responsibilities — I continue to feel fully responsible for the company,” Diess said.

Diess's future had been in doubt after clashes with Volkswagen's powerful labour unions, though sources told Reuters as early as November he was likely to stay on.

Preference shares in the company traded 1% lower, giving up some gains after being boosted by speculation about a possible listing of luxury division Porsche AG earlier this week.

Diess' management and communication style, warning of tens of thousands of possible job losses in coming years and frequently highlighting the threat of competition from Tesla, angered the car maker's works council, prompting weeks of negotiations over his future at the firm.

At a news conference on Thursday, works council head Daniela Cavallo, who had lashed out at Diess for fuelling concerns among the car maker's workforce, said she was happy with the outcome of negotiations.

“I have no interest for us to have these conflicts in public,” Cavallo said. “The conclusions of this planning round are clear: we have a solid and robust plan we can all be proud of.”

Volkswagen supervisory board chair Hans Dieter Poetsch said the group was able to fully fund the programme, adding the group had some intelligent financing concepts up its sleeve, without being more specific.

Spending for electric vehicles will be raised to €52bn (roughly R936,480,480,000), up around half compared with last year's blueprint, which Diess said was also a reflection of the changes Volkswagen is going through to overtake Tesla.

“We are becoming a battery manufacturer, a charging infrastructure manager, software is playing a more dominant role ... we are developing new business activities with an unbelievable dimension for us,” he said.

Diess said Volkswagen expected to generate €20bn (roughly R360,163,533,600) of revenue by 2030 from its battery division alone, which is being readied for a partial sale or listing.

The reorganisation of the leadership team would see the Volkswagen Group delegating management of individual car brands to focus on these overarching business areas, Diess said.

The world's second-largest car maker also confirmed it expects its operating margin to be at the upper end of its 6%-7.5% target range for 2021.

Toyota halts production at Japan factories due to supply shortage

Toyota Motor Corp has halted production at two factories in Japan due to a supply shortage, a spokesperson told Reuters on Thursday.
Motoring
1 month ago

The US National Highway Traffic Safety Administration said Wednesday it is reviewing a recent software update by Tesla Inc. that allows drivers to ...
Motoring
1 month ago

Aston Martin Lagonda Global Holdings Plc has been struggling with electronics issues plaguing the launch of Valkyrie, the £2.4m ($3.2m or roughly ...
Motoring
1 month ago