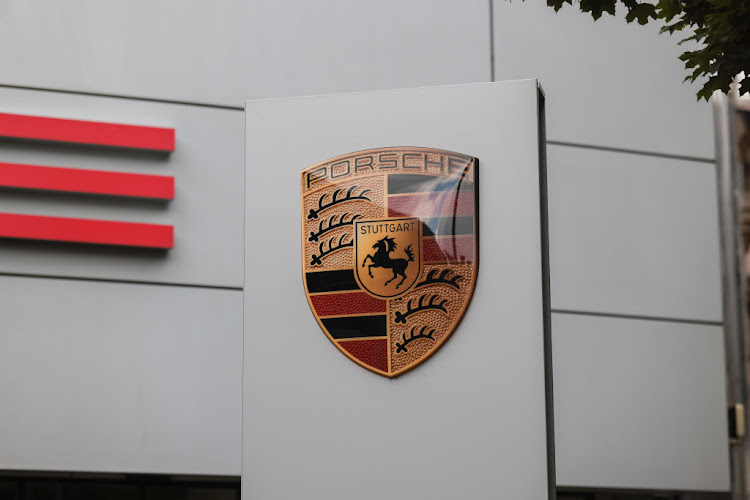 Porsche is pitching its initial public offering as a chance to invest in a company that combines the best of carmaking rivals like Ferrari NV and luxury brands such as Louis Vuitton. The problem is, not all investors are buying it.

In early meetings with portfolio managers, the Volkswagen AG unit compared itself to the French handbag maker and Cartier owner Richemont as businesses that generate healthy profits and significant sales volumes, according to people familiar with the matter. It also cited Ferrari, which boasts industry-leading margins but ships only a fraction of the more than 300,000 cars Porsche makes every year.

Among concerns flagged by investors is a listing structure that fails to make Porsche more independent from its parent, said the people, who asked not to be identified discussing confidential information. They’re also citing headwinds in the IPO market, which has slowed dramatically due to jitters over runaway inflation, rising interest rates and the war in Ukraine that has sparked Europe’s worst energy crunch in decades.

“Porsche isn’t a safe bet in a recession because it’s not as exclusive as Ferrari,” said Daniel Roeska, an auto analyst at Bernstein.

“If you don’t change the governance and allow Porsche to decide what’s best for itself rather than making decisions at the group level, then you’re not maximising shareholder value.”

The offering, which may launch as soon as September, is poised to be one of Europe’s biggest ever. VW has hired more than a dozen banks to push the IPO, which could value Porsche at as much as €80bn (roughly R1,370,320,105,000) to €90bn (roughly R1,532,034,900,000), according to people familiar with the matter. If achieved, that could exceed the parent company’s current market value. It comes at a time when automakers are battling supply-chain snarls and have embarked on a costly transition to electric vehicles.

Still, an IPO of that size is so rare in Europe that it can defy the broader market slump, with portfolio managers forced to take a hard look at the candidate because it will automatically enter the region’s main equity benchmarks, the people said.

While VW didn’t provide specific numbers or a valuation target in the meetings in Europe and the US, fund managers who attended were left with a positive impression about the brand’s potential to lift margins in the medium term, the people said. Porsche is holding a capital markets day on Monday where it could map out a renewed profit push.

VW plans to sell a stake of as much as 25% of preferred shares that don’t carry voting rights. The powerful billionaire Porsche and Piech clan, which controls VW through voting stock, would receive a special dividend to fund buying a blocking minority stake in Porsche.

A spokesperson for Porsche declined to comment when contacted by Bloomberg News.

Porsche’s managers “presented their strategy to taking the company forward very well”, said Simon Jaeger, a portfolio manager at Flossbach von Storch AG. However, he cautioned that the planned ownership structure is poised to weigh on the company’s valuation.

Investors have in the past blamed VW’s convoluted governance structure for its sub-par stock market performance. VW’s preferred shares have dropped around a quarter this year, valuing the entire company – which also includes Audi, Lamborghini and Bentley – at roughly €80bn.

VW has been pushing for years to become more nimble but success has been limited. A listing of Traton SE, VW’s truckmaking unit, fizzled amid internal ructions and a small free float. The firm’s shares have almost halved since the 2019 IPO.

Porsche argues it stands out among luxury-car makers because of its high volumes. The brand sold 301,915 vehicles last year, compared with Ferrari’s 11,155 and the 6,178 autos shipped by Aston Martin Lagonda Global Holdings Plc. It’s also touting Porsche’s resilience when it comes to profitability, with the unit’s operating margins coming in at an average of 16.1% in the five years through 2021, according to a presentation seen by Bloomberg. 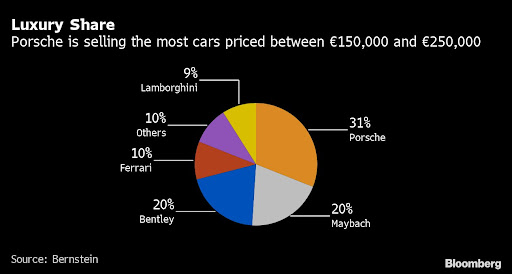 Porsche is pitching its initial public offering as a chance to invest in a company that combines the best of carmaking rivals like Ferrari NV and luxury brands such as Louis Vuitton. The problem is, not all investors are buying it.
Image: Bloomberg

However, there’s concern about the macro environment. The auto industry has had trouble ramping up production after the Covid-19 pandemic rattled global supply chains and sparked a shortage of semiconductors. Tesla Inc, the world’s best-selling EV maker, has lost around a third of its value this year. Even Ferrari, which targets an operating margin of as much as 30% by 2026 and is seen as the gold standard of successful luxury car IPOs, is down about 16%.

“Porsche’s margin profile puts it at a discount to Ferrari,” said Dev Chakrabarti, a portfolio manager at AllianceBernstein.

There’s one key aspect Porsche has going for it: It’s far ahead of peers including Ferrari and Aston Martin when it comes to electrifying its lineup.

The early IPO meetings were held in Frankfurt, London, New York and Boston, one of the people said, adding some investors were given a tour of a plant where Porsche assembles the Taycan, an EV that outsold the iconic 911 last year. The manufacturer is also preparing to launch a battery-powered version of its popular Macan SUV to take on Tesla’s Model Y.

Porsche “is the closest legacy brand to Tesla in terms of electrification”, Bloomberg Intelligence analyst Michael Dean said in a note this week.

Tesla Inc CEO Elon Musk said on Friday the electric automaker could lower prices for cars if inflation calms down.
Motoring
4 weeks ago

Baseball coach Adolfo Alvarez was traveling to a game with a group of children and their parents toward Venezuela´s northwestern city of Maracaibo ...
Motoring
4 weeks ago