The realm of the hot hatchback: a varied and exciting space with many layers. At the top of the pecking order there are mighty brutes with fearsome outputs and sprint times that could embarrass more exotic wares. Think Mercedes-AMG A45 and Audi Sport RS3.

In the middle of the pack there are milder, friendlier, contenders leaning towards sensible requirements in addition to delivering those sporty thrills. Like the evergreen Volkswagen Golf GTI.

And then we have the plucky juniors at the opposite end of the spectrum. They emphasise attainability in addition to fun – a gateway of sorts into the niche of performance motoring. Such as the duo seen here. Introducing two well-matched examples of the breed, the Suzuki Swift Sport and Abarth 595 Competizione.

They both wield 1.4-litre turbocharged engines, both employ manual transmissions, with six forward gears in the Swift and five in the Abarth. The Japanese car costs R315 900, while the Italian is dearer at R472,900, since it is the most peppered-up option in its range. But the most basic flavour starts at R327,900.

Not featured is the R365,900 Opel Corsa GSi. We did ask for one, but the manufacturer opted not to send a unit. Ostensibly because of certain observations we made in our evaluation earlier this year. Sour grapes it appears ... But the show must go on. On the agenda were three simple tasks: an acceleration test, a dynamic appraisal and a brief look at the practical elements.

Since both are equipped with row-your-own gearboxes, there is no digitised launch control trickery or dual-clutch dexterity to help one bolt off the line optimally. Setting them off effectively relies solely on skilful pedal modulation.

Suzuki claims a figure of eight seconds flat. We managed 8.9 seconds. Matters were far trickier in the dainty mouse with the scorpion on its nose. While Abarth touts a 6.7-second 0-100km/h time (and the more aggressive exhaust note); the best we could extract was 10.1 seconds. Stints in both cars were dispatched with the electronic stability programmes on – a decision that evidently affected the yellow car more than it did the grey specimen.

Sadly, a tendency to bog down affected the run of the Cinquecento. We would be open to receiving a tutorial on the take-off technique that produced the impressive on-paper time quoted by the manufacturer. Our times were courtesy of a Garmin GLO receiver linked to the Track Addict smartphone application.

Abarth 595 Competizione has one of the loudest exhaust systems you'll find in this segment of car.
Image: Waldo Swiegers

Red Star Raceway in Mpumalanga was designed primarily for the use of motorcycles. Still, it made a suitable proving ground for our dainty warriors, with a mix of lengthy straights and challenging squiggles.

Instead of racing against the clock, we opted for an observational undertaking over a full-on competitive duel for this one. Reason being, we were urged not to crash the Abarth as the vehicle was graciously availed to us by one of the staff at Fiat Chrysler Automobiles SA. It is his personal car. He had to take an Uber for the week. The 595 Competizione has an output of 132kW and 250Nm – which is a fair amount of poke in a car weighing 1035kg. The sensation is akin to piloting a flaming ping-pong ball, darting from apex to apex at a rapid rate off knots. Sure, take-off might not have proven to be a forte on the day, but the bounty of torque once on the boil ensured stout momentum for our track exploits.

Being the most focused of the 595 range, it brings the correct hardware. That includes shocks from KONI and anchors that were breathed on by braking specialists, Brembo. This Competizione was a hoot. Whimsy all-round, a clown car with a short wheelbase packing the spirit of a racer. On emotional value, this spiciest Abarth gets a good score. 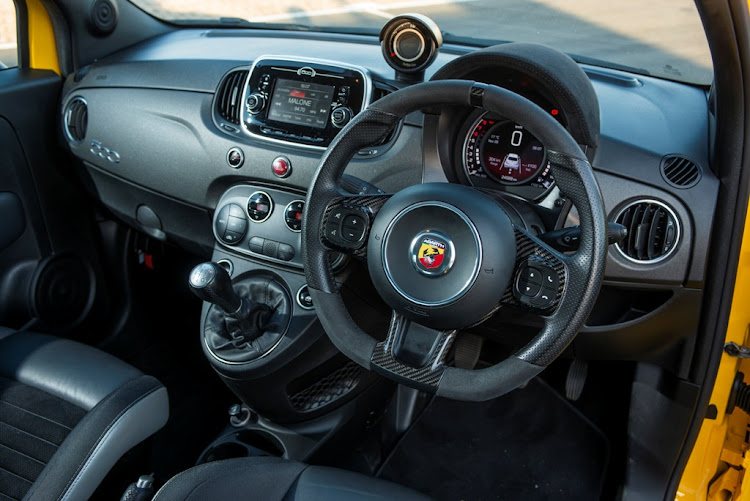 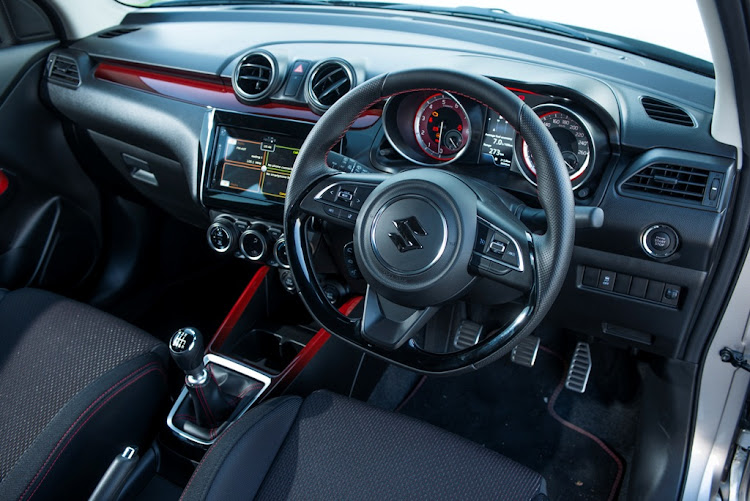 In contrast we have the more grown-up, more civilised Suzuki Swift Sport – which is not to cast the aspersion that it is something of a bore.

Not by any stretch of the imagination. Its 103kW and 230Nm is delivered with real urgency, attaining pace is certainly easier now than it was with the normally-aspirated predecessor. But the party-piece is how composed it feels under duress. It also weighs a substantial 65kg less than the Abarth, at 970kg, offsetting that deficit in quoted output.

As a bonus, the Swift Sport is friendlier and more usable in conditions other than the track. Its suspension is forgiving, compliant and it rides on tyres with a higher profile. If the Abarth is a scorching ping-pong ball that scurries about with more than a hint of waywardness, then the Swift is a well-planted Jack Russell terrier, with a more deliberate and calculated demeanour.

Both hatches are game for a little track work.
Image: Waldo Swiegers

The Abarth has a 185l boot, or 550l with the seats folded. You might need to take up a sporting hobby that takes up less space. Like stamp collecting. The Suzuki has a 242l capacity, or 556l with the seats folded. Just a little bit more room for your nine-iron or stamp box to breathe. No prizes for guessing which vehicle offers easier ingress and egress for passengers ...

An expected verdict, perhaps. The cheaper, roomier, more practical and more comfortable Swift is the objective and rational choice. But the Abarth can take a moral victory for this one. It remains a praiseworthy ride for its character-laden and spunky nature, conjuring all those well-loved clichés generally reserved for certain soulful-but-compromised Italian cars. While the motoring landscape continues to change, we hope the junior hot hatchback genre endures.

Join the Ignition TV team for a tyre-scorching shoot-out between the BMW M2 Competition, Kia Stinger and Audi RS4.
Motoring
1 year ago

Join Ignition TV presenter Marius Roberts as he chats to studio guests Sean Nurse and John Whittle about which bakkie is top of the class - the ...
Motoring
1 year ago
Next Article