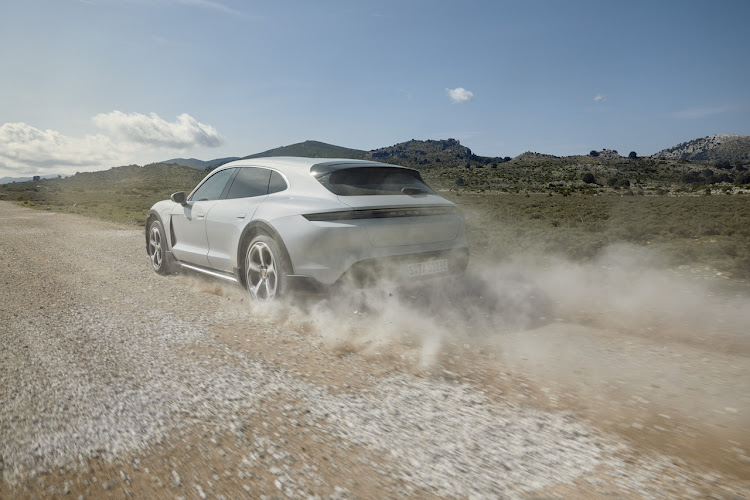 The Taycan Cross Turismo is more than at home on dirt roads.
Image: Supplied

It’s a significant time for vehicle development, as most carmakers transition to electrified power trains. This era will go down in history as the one in which the bulk of high-volume manufacturers released their first series production models powered by batteries alone.

Think geneses like the Nissan Leaf, BMW i3 and Jaguar I-Pace. There are plenty more, of course, but we’ve singled-out these three models since they’ve been available for South Africans to purchase.

On the high-performance front, Porsche led the charge with the local release of its Taycan in 2020. And when we reported on the model last year, having spent a day with the Turbo S derivative, the impression was one of sheer bewilderment. Its 0-100km/h sprint time of 2.8 seconds, owed to a maximum combined output of 560kW and 1,050Nm, was stupefying. Beyond the road-shredding acceleration, it handled with the poise and agility befitting a product adorned with that golden Stuttgart crest.

Earlier this year the range expanded, with the addition of an entry-level, rear-wheel drive version. Now the Cross Turismo has landed, billed as a companion for buyers with lifestyles that lean towards the adventurous side of the spectrum. 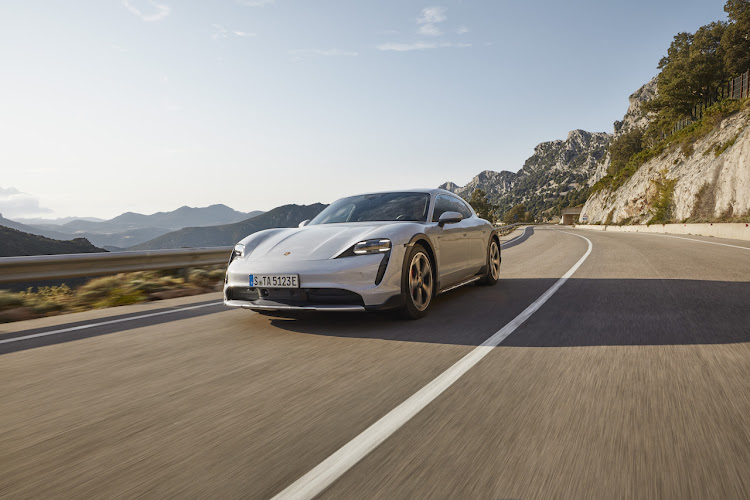 The type of individuals who might want to load their mountain bicycles onto the roof or behind the tailgate, for a sojourn in the countryside. But at the same time, said buyer doesn’t want to forego the dynamic benefits afforded by a low centre of gravity, or the aesthetic privileges of a silhouette as appealing as the Taycan’s.

What you have here is a crossover in the truest sense of the word. It’s part sports car, part glamorous four-door-coupé, with a superior ground clearance over its brethren and hardy plastic body armour. We sampled the middle-tier 4S version, slotting above the base offering (which still has all-wheel drive) and below the Turbo.

Adaptive air-suspension is standard across the board, while Porsche notes a ground clearance of 146mm. Though 19mm more than a regular 4S, it may not be sufficient for genuine forays of obstacle-surmounting: stick to dirt tracks instead. Or gravel, as prompted by a designated driving mode for such terrain. The setting optimises the electronic stability programme, damping characteristics and throttle sensitivity for improved traction off asphalt. An optional specialised off-road package brings a further 30mm of clearance, enabling a more useful 176mm with the vehicle in its highest, tippy-toe setting.

There’s no doubting the model’s viability as a getaway chariot, thanks to its commodious (for the category) luggage compartment of 446l. Don’t forget the frontal trunk area, with a handy 84l for smaller items. With just driver and front passenger on board, the rear seats can make way for a sizeable 1,212l of stowage space. 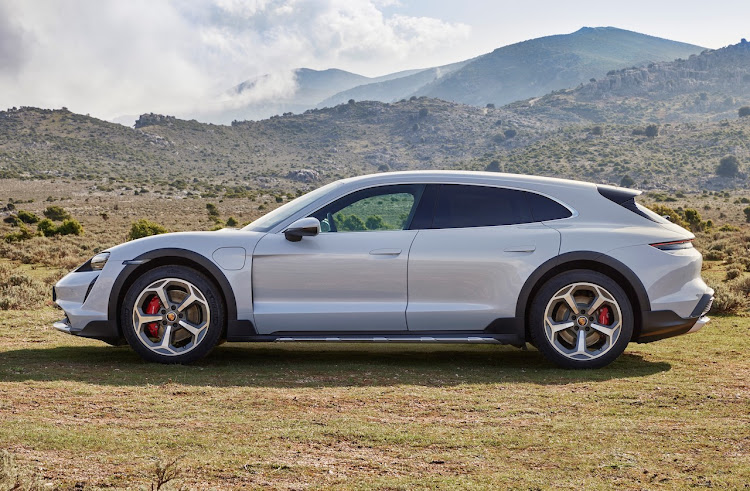 Adaptive air-suspension is standard across the board, while Porsche notes a ground clearance of 146mm.
Image: Supplied

Ingress and egress is a reminder that the Taycan, even in more versatile Cross Turismo guise, is very much a machine with a sporting streak. Getting behind the wheel requires the same delicate balancing act you would reserve for the 718 Cayman, with its narrow door apertures. It’s a snug environment, with expectedly high levels of tactile quality and the signature three-spoke steering wheel that feels so natural, so right, in the hands.

What might feel unnatural at first is the extent to which all functions are digitised. Even the air-conditioning vents. They don’t have traditional louvres that you can slide left or right. Instead, you angle the direction of flow with your index finger on the central screen’s display. Buyers can also specify an optional compass, mounted to the top of the dashboard. It’s a novel touch.

Porsche states it would take nine hours for a full charge (from 0%) using an alternating-current with 11kW. Fast-charging facilities using a direct-current, on maximum power, could enable an 80% boost in as little as 23 minutes.

Those of us in the motor-noting profession still need to wrap our heads around reporting the finer details of new-energy power trains. Litres, displacements and cylinders will soon become outmoded terminology. 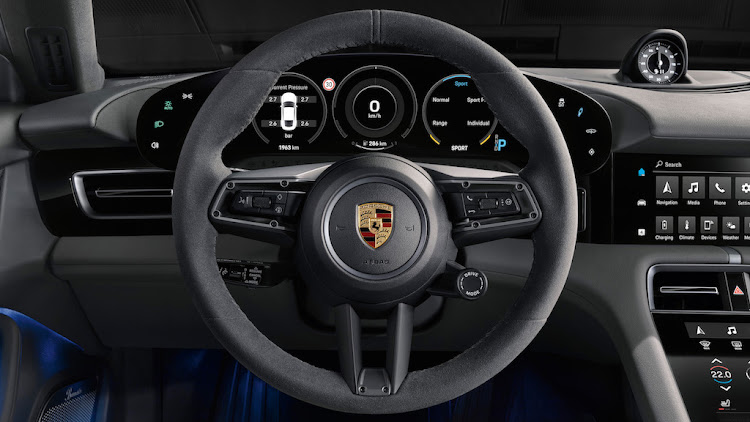 The cabin of the Taycan Cross Turismo is heavily digitised.
Image: Supplied

But try to remember this next time you’re discussing the Taycan Cross Turismo around the fireside: it’s powered by a two-deck battery containing 33 cell modules, consisting of a dozen cells each, tallying 396 in total. Its total capacity is 93.4kWh. Maximum power output (launch control mode) in the 4S is 420kW and 650Nm, which is good for a dash time of 4.1 seconds, onto a top speed of 240km/h. It employs a two-speed transmission.

Cruising at the national limit is also a forte of the 4S, dispatching the kilometres in near-silence, with wind and tyre noise barely audible from within the well-insulated cabin.

A long-distance range of 355km is achievable, according to Porsche, while that could extend to as much as 532km, if urban commutes are solely on the agenda. In that case, you would be advised to keep it in the range-optimised driving setting, rather than the sport-plus option.

Plugging-in isn’t a concept as foreign as it might have been five years ago. Porsche has charging facilities at each of its centres, and service providers such as Plug Share have made it easier for electric vehicle drivers to locate charging points.

All things considered, the Taycan Cross Turismo makes a compelling argument for buyers wanting the traditional virtue of Porsche performance, with a zero-emissions spin and a character that complements their outdoorsy aspirations.

One of Mazda SAa’s recent missteps involves the current ND-generation MX-5. Someone thought it would be a great idea to cull the traditional fabric ...
Motoring
2 weeks ago

Yes it's eye-wateringly expensive, but the rally-bred hatchback is an enthralling drive
Motoring
2 weeks ago