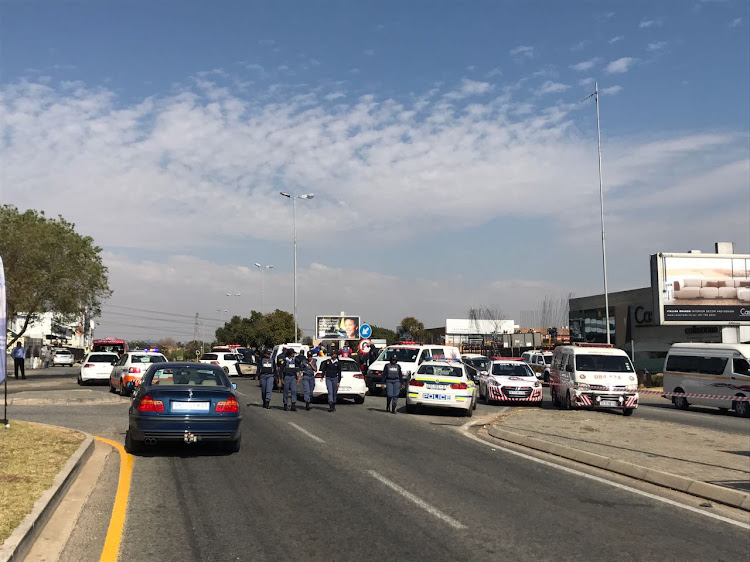 A man was shot and killed in his car on Bowling Avenue in Sandton on Tuesday afternoon.
Image: ER24

These are some of the words used to describe the businessman who was killed in broad daylight this week when gunmen opened fire on his Bentley in Sandton‚ Johannesburg.

Midday traffic ground to a halt in Bowling Avenue on Tuesday. A man lay slumped over the steering wheel of his luxury vehicle‚ with fatal gunshot wounds.

“That's how my friend and homeboy from Welkom‚ Free State … ‘Igo’ Mpambani's life ended … may your soul rest in peace‚” his close friend Louis Lebusho Moahlodi said in a post on Facebook.

Nothing appeared to have been stolen during the shooting‚ leading to speculation as to whether it was a botched hijacking or something more sinister.

“He was like a son to me‚” Moahlodi told TimesLIVE on Thursday.

“He is one of the children in the area that grew up right before my eyes‚ ” he said.

Ignatius Mpambani‚ an entrepreneur‚ had interests in the telecommunications and engineering sectors. He was also popular in the Free State where he had been a driving force behind festive season entertainment events in Welkom.

“We became very close eight years ago. He used to come to me and present some proposals. He was a very humble person. He always had entrepreneurial aspirations” said Moahlodi.

Sandton midday traffic came to a halt on Tuesday afternoon after a man was shot dead in broad daylight on Bowling Avenue. The man‚ believed to be in ...
News
4 years ago

Linda Marie Van Eck‚ who previously handled the slain businessman’s accounts‚ could not understand why anybody would want to kill him. “He was a very humble person in spite of his riches‚” she said.

“I worked with him for four years when I lived in Johannesburg. He was a wonderful person‚ very humble. He was always friendly. Even though he had a lot of money he was one of the few people who stayed humble.”

Van Eck recalled the popular Beach on the Track Festival that Mpambani used to organise in Phakisa‚ Welkom.

“He decided to start this festival for people who could not afford to go away for the December holidays‚ to have it in Phakisa. It was a beach on track event‚” she said.

“He phoned me a few weeks ago and I couldn’t answer because I was busy at that moment. He wanted to come over to this new accounting firm. It was a huge shock to me to find out about his death‚” she said.

Police spokesman Lungelo Dlamini said‚ “The investigation is ongoing. There have been no arrests at this stage."

He confirmed that the businessman’s family and next of kin were aware of the tragedy.