Some 3,000 cases of typhoid have been reported in Zimbabwe's capital of Harare since the first case was detected in a working-class suburb in January, state media reported on Sunday. 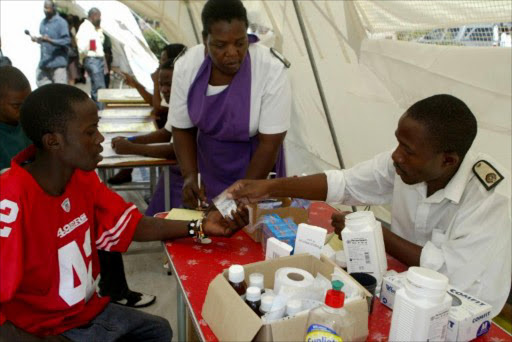 Patients receive medication at a typhoid screening and treatment at a clinic in the Kuwadzana township on the outskirts of Harare on January 31, 2012.
Image: AFP PHOTO / JEKESAI NJIKIZANA

"At the moment we have over 3,000 cases, both suspected and confirmed," The Sunday Mail newspaper quoted Prosper Chonzi, the city's health services director as saying.

More than 90 people from one of the capital's suburbs, Kuwadzana, were admitted to hospital in January. Health authorities banned open-air food vending to try to curb the spread of the disease.

"Our worry is that typhoid is now spreading to other areas adjacent to Kuwadzana," Chonzi said.

"We are now moving into the unaffected areas so that we can educate people about the spread of typhoid. The city has found it better to concentrate on preventive measures rather than corrective measures."

Health Minister Henry Madzorera said in an interview with state television the government had no money to deal with the typhoid outbreak which has since spread to other provinces.

Typhoid thrives in areas that do not have proper sanitation.

Some suburbs go for weeks without running water as Zimbabwean municipalities struggle to keep up services.

Last October, more than 6,000 cases of diarrhoea were reported in the southern towns of Masvingo and Kadoma and children were the worst affected.

Four years ago over 4,000 people died of cholera in an outbreak which affected nearly 100,000 people.