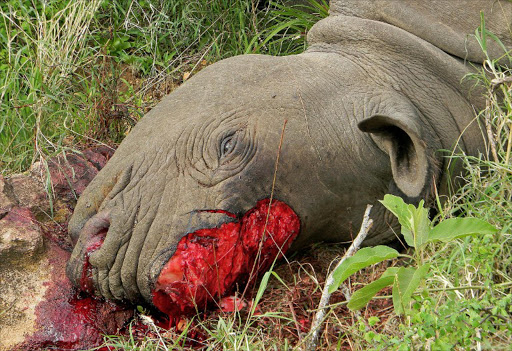 A handout photo provided on November 19, 2013 by the Lewa Conservancy shows Meluaya, a 17-year-old black rhino, who was killed and dehorned by poachers at the Lewa Conservancy. The dead rhino, which was suspected to have been pregnant, also had a two-year-old calf with her, who has since been found by Lewa patrol teams.
Image: AFP PHOTO

Poachers slaughtered a rhino in one of Kenya's best guarded wildlife parks, officials said Tuesday, in a brazen attack highlighting the risks gunmen are taking during a surge of killings.

"Poachers infiltrated Lewa's borders during the full moon on November 17 and killed Meluaya," a 17-year-old black rhino suspected to have been heavily pregnant and a two-year-old calf, Lewa Wildlife Conservancy said in a statement.

"Both horns were removed and the poachers got away with them."

Lewa's more than 60 rhino are monitored every day by special surveillance teams, part of a security force of 150 staff. They include armed rangers and dog handlers who patrol with bloodhounds around some 150 kilometres (90 miles) of electric fence surrounding the park.

Conservancy personnel also use aerial surveillance to monitor the animals and try to track poachers.

Lewa is privately owned but run as a non-profit dedicated wildlife area, and came to world attention when Britain's Prince William stayed there with Catherine before proposing marriage.

Poaching has risen sharply in Africa in recent years, with rhinos and elephants particularly hard hit.

Earlier this month, Kenya's Attorney General Githu Muigai said the country had lost 90 elephants and 35 rhinos to poachers so far this year.

Asian consumers who acquire smuggled rhino horn -- which is made of keratin, the same material as human fingernails -- believe that it has powerful healing properties.

Isiolo county deputy governor Mohamed Guleid condemned the killing and pledged to "do everything to protect our national heritage and pursue the killers".

Inserting the chips entails shooting the rhino with a tranquiliser dart fired from a helicopter.