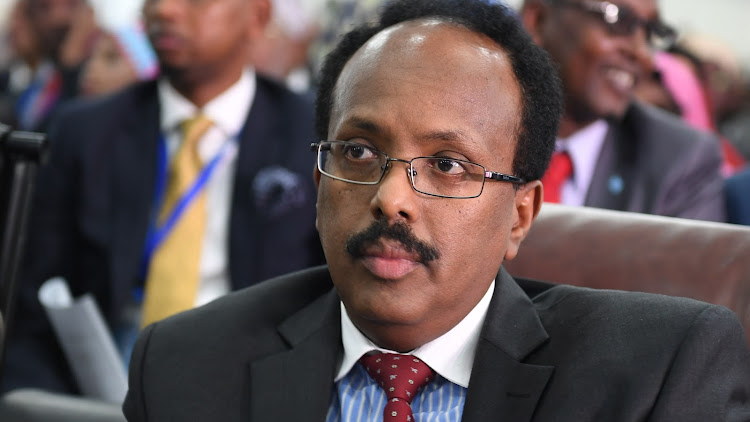 Some Somali lawmakers said on Wednesday they plan to impeach the president in a mounting political crisis that could put the fledgling government on a violent collision course with one of the country's most powerful clans.

The political turmoil endangers fragile gains against the Islamist al Shabaab insurgency and could derail the government of President Mohamed Abdullahi. Universally known by his nickname "Farmajo", the dual US-Somali citizen took power earlier this year in a UN-backed process.

The Horn of Africa state's parliament adjourned last week until the end of February, but some legislators want it to reconvene on an emergency basis, lawmaker Mahad Salad told Reuters.

"Ninety-six lawmakers have asked the speaker to reopen the session so that the impeachment against the president kicks off. The president is accused of violation of the constitution, treason, destruction of the federal states and so on," he said.

The letter had not yet been delivered to the speaker. There are 275 lawmakers and two-thirds would have to vote against the president to impeach him.

The motion follows a deadly raid on Sunday on the home of an opposition leader, Abdirahman Abdishakur Warsame, who ran for the presidency against Farmajo. Somali security agents arrived at his house around midnight and engaged his guards in a firefight, killing five people.

The minister of security said Warsame resisted arrest and he would be charged with treason. He appeared in court on Tuesday but no warrant was shown for his arrest, a witness said. A Wednesday court hearing was postponed until Thursday.

The information minister did not return calls seeking comment. A statement from the security minister and attorney general said they were "investigating the crimes of Somalis who were involved in treason, terror and the destruction of government systems".

Warsame comes from Somalia's formidable Habar Gidir clan, which is spread across south-central Somalia. Although both his supporters and the government stress that his detention is political, rather than a clan issue, it will further sour relations between the two sides.

If that sparks fighting it could split Somalia's security forces, which are composed mostly of clan-based militias. In September, a battle between the police, intelligence, and military killed nine people in Mogadishu's Habar Gidir district.

"It's a lose-lose situation for the government. If they pursue this, they face a showdown with the Habar Gidir, who are powerful, wealthy and well-armed and provide many units in the SNA," said a Somalia security analyst who spoke on condition of anonymity, referring to the Somali National Army.

"If they back down, they look weak. It's very hard to see how the administration could survive this crisis."

In August, a joint US-Somali raid in the town of Bariire killed 10 Habar Gidir members. The U.S. military said they were Islamist militants but clan elders said they were civilians.

In May, a soldier accidentally killed the minister of public works in a case of mistaken identity. A Habar Gidir clan member, the soldier was sentenced to death, angering clan members who felt that blood money should have been accepted.

Somalia's new government has won plaudits from diplomats for trying to assess the extent of mismanagement and corruption in the armed forces and the International Monetary Fund has praised it for fiscal reforms.

But at home, the government has many problems.

It has hired and fired a string of top security officials. Al Shabaab militants, skilled at exploiting clan divisions, stepped up a campaign of deadly bombings in Mogadishu. One October bomb killed more than 500 people.

A split between Qatar and the United Arab Emirates, both of which have supported Somali factions, has fuelled a spat between the president and leaders of Somalia's regional administrations, damaging security cooperation.

This month, the US government announced it was suspending aid to most of the military over accountability concerns.

Now many parliamentarians are angry that a government that promotes itself as reformist is arresting critics like Warsame, said Abdirizak Mohamed, a lawmaker and former security minister.

"MPs are concerned about freedom of expression and association. This was an unnecessary crisis when they already had a lot on their plate."