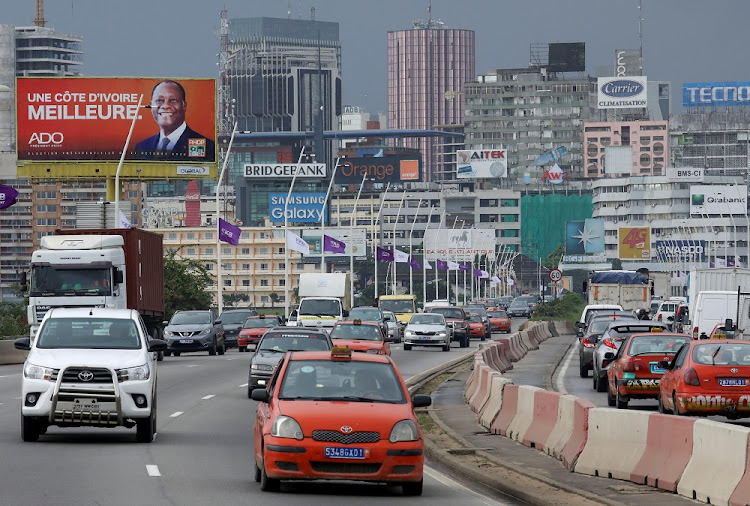 A campaign billboard of a presidential candidate Alassane Ouattara of the ruling RHDP coalition is pictured on the General De Gaule Bridge ahead of the presidential elections in Abidjan, Ivory Coast October 27, 2020.
Image: REUTERS/Luc Gnago/File Photo

As sleek highway overpasses and shopping malls sprouted in Ivory Coast's commercial capital Abidjan following the 2010-11 civil war, investors often pointed to 2020 as the year that could unleash the country's full economic potential.

A successful transfer of power when President Alassane Ouattara's second term expired, they said, would help banish memories of the disputed 2010 election that led to the war and attract other investors still wary about instability.

But as Ivory Coast heads toward an election on Saturday that Ouattara is unexpectedly contesting and his main opponents are trying to sabotage, that looks an increasingly distant prospect.

Investors and analysts say they do not expect the vote to lead to an all-out war but warn that disputes about its legitimacy and opposition calls for civil disobedience could mean a protracted period of uncertainty.

Veteran investors in Ivory Coast, Francophone West Africa's largest economy and the world's top cocoa producer, are used to weathering turmoil. GDP growth from 2012-2019 averaged more than 8% despite sporadic unrest, including a series of army mutinies and strikes by civil servants.

Foreign direct investment inflows under Ouattara have nearly tripled to over $1 billion.

Foreign direct investment inflows under Ouattara have nearly tripled to over $1 billion. The government has ensured stable prices for cocoa farmers, leading to fewer supply disruptions.

But old anxieties are resurfacing. Ouattara's announcement in August that he would seek re-election - reversing an earlier decision not to run - has led to violent protests by opponents who say he is violating the constitution.

Thirty people have died in clashes since then.

Investors say political unrest is compounding the impact of COVID-19 and squeezing access to credit. The head of one cocoa exporter said his company usually receives a 15 billion CFA franc ($27 million) bank loan before the main crop harvest opens on Oct. 1. This year, he got just 2 billion CFA francs.

"The instability and the political uncertainty means that no one want to take a risk - not the banks, not the insurers, no one," he said.

A former senior International Monetary Fund official, Ouattara is popular with investors, who credit him with implementing pro-business policies.

Despite the investment of the past decade, analysts say Ivory Coast has not realised its full economic potential.

The poverty rate has fallen but is still nearly 40% and the government acknowledges that red tape and corruption are obstacles to business.

"The state administration is not yet in complete synergy with the private sector," Patrick Achi, secretary-general of the presidency, told business leaders last week.

Sectors like gold mining, tourism and transport remain underdeveloped. While companies from a handful of countries like France and Morocco have invested heavily over the past decade, others, including American firms, have been more reticent, concerned about corruption and political instability.

The US ambassador in Abidjan, Richard Bell, said he participated in a virtual roundtable earlier this year with American companies interested in Ivory Coast.

"They weren't thinking about doing a lot of investing before the election but they were seriously interested in considering investing ... if things went well," he said.

"This is a fraught time and the stakes are high."