Sadc orders fact-finding mission for Mozambique while mulling next move 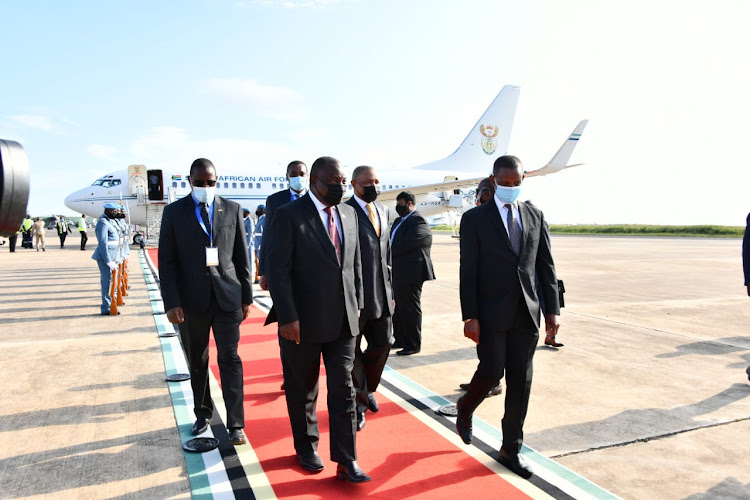 The Southern African Development Community (Sadc) has directed an immediate “fact- finding mission” to assess and investigate further the situation on the ground in Mozambique after attacks by insurgents allegedly linked to Islamic State two weeks ago.

This while another summit has been convened for later this month to decide what should be done.

“The Double Troika Summit has directed an immediate technical deployment to the Republic of Mozambique, and convening of an Extraordinary Meeting of the Ministerial Committee of the Organ by April 28 2021 that will report to the Extraordinary Organ Troika Summit on April 29, 2021,” Sadc said in a statement on Thursday afternoon.

President Cyril Ramaphosa arrived in Maputo — accompanied by the ministers of international relations and co-operation Naledi Pandor, defence and military veterans Nosiviwe Mapisa-Nqakula, and state security Ayanda Dlodlo — for the extraordinary Double Troika Summit of heads of state and government of Sadc.

The summit, chaired by Botswana President Mokgweetsi Masisi in his capacity as chair of the Sadc Organ on Politics, Defence and Security Co-operation, deliberated on measures to address terrorism in the country after continued terrorist attacks in Cabo Delgado.

Two weeks ago, Mozambique was besieged by insurgents allegedly linked to Islamic State who overran the gas fields town of Palma, killing dozens of people and displacing many others.

Sadc leaders met on Wednesday and Thursday to deliberate and consider a regional response to the insurgency while the US has reportedly already sent a small army special forces team to Mozambique on a training mission.

In the brief statement, the summit condemned the terrorist attacks.

“[It] noted with concern, the acts of terrorism perpetrated against innocent civilians, women and children, in some of the districts of Cabo Delgado province, condemned the terrorist attacks in strongest terms and affirmed that such heinous attacks cannot be allowed to continue without a proportionate regional response.

The summit expressed full solidarity with the Mozambican government and its people.

Last week Ramaphosa told the SABC that SA had “already attended to the issue of evacuating South Africans stranded in Mozambique”, including a man who had died.

“The SANDF has already brought them back, and we remain involved with securing the safety of our people in Mozambique.”

The president was referring to the repatriation of six South Africans and the body of another — Adrian Nel — who was killed by insurgents who attacked Palma.

There has been widespread speculation over whether SA would deploy troops to Mozambique to help fight the insurgency. At the weekend ministry of defence spokesperson Siphiwe Dlamini said SA’s intention was to “assist in the development of a solution that will secure peace and continued development in Mozambique”.

The government said that, with the exception of the one person who died in the violence, more than 50 South Africans who were reported missing had been accounted for.

Dlamini said that on March 30, the air force had repatriated the body of the deceased together with his family, adding that the defence force continued to provide logistical support to the South African high commission in Maputo with regard to consular services, including repatriation.

Islamic State-linked insurgents have reportedly been increasingly active since 2017 in the northern Cabo Delgado province where Palma is located, though it is unclear whether they have a unified aim.

On Thursday morning, Reuters reported that Mozambican President Filipe Nyusi told the international community what support the country needed to deal with an Islamic State-linked insurgency, but for reasons of sovereignty it would be tackling some aspects of the problem unassisted.

Zimbabwean President Emmerson Mnangagwa said SADC would "act urgently to ensure peace for the benefit of all our peoples”.

“In AU speak, a technical mission resembles a fact-finding mission which will comprise of official military and intelligence officials. This is done to assess and investigate further on the next step before a possible deployment.”

While Nyusi has outlined what measures he would like to be taken, Louw-Vaudran said Mozambique will undoubtedly need military assistance from its neighbours.

“We have definitely seen that the Mozambican military itself needs assistance. They have in the last couple of months called on private military companies because they just don’t have the capacity.

“Nowhere in the world have we seen one country fight this kind of terrorism. Even if you look at Somalia and other counties around Africa that have fought against Boko Haram, it is very difficult to do that as one country.”

Louw-Vaudran said the US and Portugal are already training special forces in the country.

“That training will not make such a big impact now. Ideally, they will need the sharing of intelligence because the big issue is to know where these insurgences are getting their money from, where they are growing in strength and their links to the Islamic State.”

Louw-Vaudran said Mozambique’s response would require the sharing of military intelligence and equipment, and some have suggested embedding troops within the Mozambican military.

“The solution that has been used all over Africa to fight terrorism is multinational forces like Sadc standby forces. Sadc even has a counter-terrorism strategy that was drawn up in 2015. Their response would definitely need to beef up its military to secure Palma and Pemba especially.”

Meanwhile, Save the Children’s country director in Mozambique, Chance Briggs, urged Sadc leaders to assess the grim situation in Cabo Delgado by prioritising the lives of children.

“We call on them to ensure any response takes the immediate needs and safety of children into account. Children are being targeted in this conflict. They are killed, they are abducted, and they are forced to leave their homes and sense of safety behind. Children must be front and centre of any response in Cabo Delgado. Children must be protected.”

Briggs said all parties to the conflict must ensure that children are never targets.

United Nations teams have received "worrying" reports that Tanzania has rejected over 1,000 people seeking refuge from an Islamic State-claimed ...
News
1 year ago

Mozambique has told the international community what support it needs to deal with an Islamic State-linked insurgency, but for reasons of sovereignty ...
News
1 year ago

For more than a week, Islamic State-linked insurgents attacked the town, which has now been ‘cleared’
Politics
1 year ago