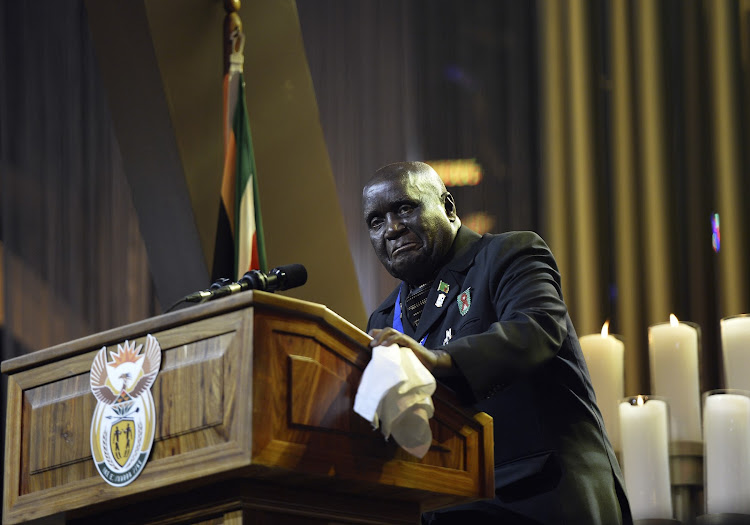 In a ruling delivered while the burial was under way, High Court Judge Wilfred Muma said there was no clear arguable case made by the applicant for judicial review.
Image: REUTERS/Odd Andersen/Pool

Zambia's founding president, Kenneth Kaunda, was laid to rest at the country's presidential burial site on Wednesday after the High Court dismissed a challenge by one of his sons that this would be against his wishes.

Kaunda ruled Zambia from 1964, when the southern African nation won its independence from Britain, until his defeat in an election in 1991. He died on June 17 in a military hospital in Lusaka.

Kaunda's son Kaweche on Tuesday challenged in court the government's plan to bury his father's remains at Embassy Park, where other former heads of state are buried and which is visited by the public as a national monument.

Kaweche Kaunda said his father's last wish was to be buried at his residence next to his wife, Betty, who died more than 10 years ago.

In a ruling delivered while the burial was under way, High Court Judge Wilfred Muma said there was no clear arguable case made by the applicant for judicial review.

"This in my view is one case which must demonstrate that public interest overrides personal interest," Muma said.

African leaders and diplomats on Friday joined Zambia in mourning its liberation hero Kaunda, who died aged 97 after a bout of pneumonia.

Although Zambia's copper-based economy did badly under his rule, Kaunda will be remembered more as a staunch African nationalist who stood up to white minority-ruled South Africa.

The burial of Zambia's founding president, Kenneth Kaunda, started on Wednesday despite a court challenge by one of his sons against his burial site.
News
1 year ago

The group is seeking relief from Anglo American for lead poisoning in Kabwe, but the company is playing hardball
World
1 year ago

The family of the late first president of Zambia Kenneth Kaunda feels strong-armed in having to agree with the country’s government to bury the ...
News
1 year ago