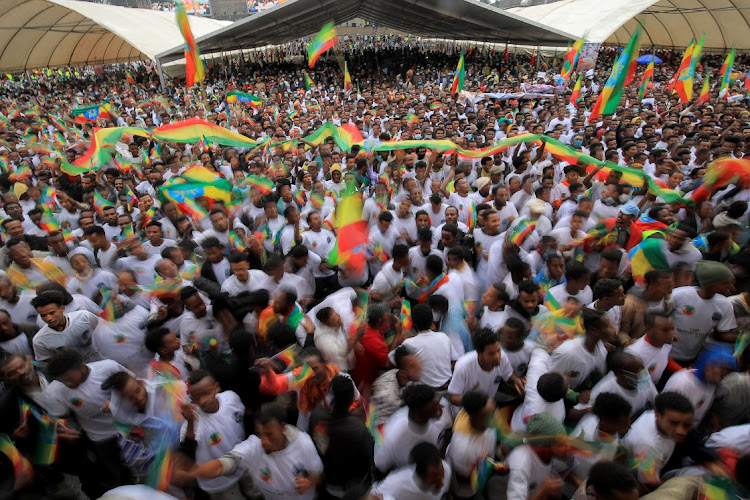 Conflict broke out between the Ethiopian central government and the Tigray People's Liberation Front (TPLF) in November with the government seizing control of the regional capital Mekelle three weeks later.
Image: REUTERS/Tiksa Negeri

Hundreds of Eritrean refugees protested in the Ethiopian capital on Thursday, calling on the United Nations refugee agency to relocate friends and family who they say are trapped in two refugee camps by fighting in the Tigray region.

Clashes between armed groups have escalated in and around the camps - Mai Aini and Adi Harush - and two refugees have been killed this month, the UNHCR said this week. The agency said it lost access to the camps on July 14.

The United States said on Tuesday it was deeply concerned about the fate of Eritrean refugees in Tigray.

"We need UNHCR to move (the refugees) from the camp because the area is a war zone," said Hermon Hailu, 22, an Eritrean refugee participating in the protest in the capital Addis Ababa.

He told Reuters he was worried about his mother in Mai Aini camp whom he had not been able to reach by phone for weeks.

The UNHCR said on Tuesday it had relocated about 100 refugees from the two sites and was in discussions with Tigrayan authorities to secure safe passage out of the camps for others.

Geneva-based UNHCR spokesman Boris Cheshirkov said the agency's the top official in Ethiopia met with the demonstrators for more than two hours on Thursday to listen to their concerns.

Thousands of Ethiopian army recruits paraded in Addis Ababa on Tuesday to bid farewell before leaving for training, potential future participants in ...
News
5 months ago

Some demonstrators on Thursday held a banner reading "Protect the rights of Eritrean refugees".

Medihn Mehari wept as she recalled the death of her infant son shortly after he was born, just after war broke out last year in Tigray.

She said she fled to safety in Addis Ababa in January from Hitsats, another refugee camp in Tigray, but did not know where her husband was.

"We want those who are there to leave the camp," she said. "I don't want the same thing to happen to them," she said.

Conflict broke out between the Ethiopian central government and the Tigray People's Liberation Front (TPLF) in November with the government seizing control of the regional capital Mekelle three weeks later.

But the TPLF kept fighting and retook Mekelle along with most of Tigray in June after government soldiers withdrew.

The camps, which have existed for years and house Eritreans who have fled repression in their home country, were caught up in violence that now threatens to escalate.

In the wake of the TPLF's successful counter-offensive, Ethiopia's other nine regions have pledged to send forces to support the military against the Tigrayan fighters.

TPLF forces have meanwhile pressed south into neighbouring Amhara region, with which Tigray has a long-running border dispute, and have vowed to continue on until the government accepts a negotiated ceasefire.

An Amhara militia member and a fleeing local resident told Reuters on Thursday that Tigrayan forces had pushed deep into Raya Kobo district after seizing territory in another part of Amhara earlier this week.

Amhara regional officials, the prime minister's office, the government's taskforce for Tigray, and the military did not immediately respond to comment requests.

Thousands of Ethiopian army recruits paraded in Addis Ababa on Tuesday to bid farewell before leaving for training, potential future participants in ...
News
5 months ago

Ethiopia's Amhara region on Sunday called on "all young people" to take up arms against forces from the neighbouring region of Tigray, who claimed to ...
News
6 months ago

More than 700,000 entries and exits counted at SA borders in May

Mozambique, Zimbabwe and Lesotho are among the 10 leading Sadc countries in terms of the number of tourists who visited SA in May, according to a ...
News
5 months ago