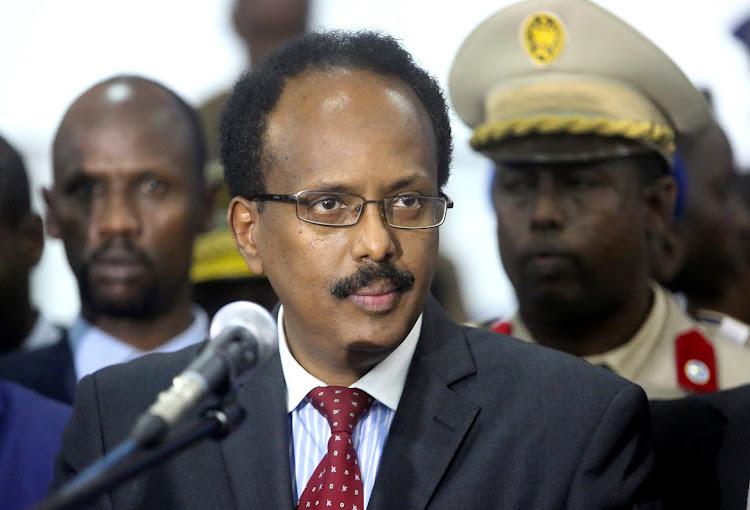 Prime Minister Mohammed Hussein Roble said he had told Fahad Yasin, the director of Somalia's National Intelligence Service Agency, to step aside for failing to deliver a report on the murder of one of the agency's agents.
Image: REUTERS/Feisal Omar / File photo

Somalia's prime minister suspended the intelligence chief on Monday, prompting a public rebuke from the president and highlighting growing divisions at the heart of the political elite.

The suspension - triggered by a dispute over investigations into an unsolved murder - followed months of wrangling that have threatened to further destabilise a country already rived by militant attacks and clan rivalries.

Prime Minister Mohammed Hussein Roble said he had told Fahad Yasin, the director of Somalia's National Intelligence Service Agency (NISA), to step aside for failing to deliver a report on the murder of one of the agency's agents.

Soon after, President Mohamed Abdullahi Mohamed issued his own statement calling the prime minister's move unconstitutional. "(Yasin) should continue being the director of NISA,” the president said.

“This shows the rift between the president and the prime minister is fully in the open - something that had been bubbling beneath the surface for some time,” Mahmood Omar, Somalia analyst at the International Crisis Group, told Reuters.

“It could result in another security crisis as the president is telling Roble there are some clear red lines to what he will accept, while Roble interprets his authority differently. The danger is either side, ... will try to impose their will on the other.”

The immediate cause for the dispute - the murder of the young female agent, Ikran Tahlil Farah, who worked in the cybersecurity department and went missing in late June - has been a highly contentious issue.

The government last week blamed the Islamist militant group Al-Shabaab for her death, prompting scores of angry posts on social media from people who said the agency itself had been involved. Al-Shabaab denied any involvement.

“This is a very serious issue,” said Rashid Abdi, a Nairobi-based independent analyst.

“It will most likely sow serious divisions within the security services and result in the type of violence we saw in April between the fragmented security forces.”

In April, factions of the security forces seized positions in the capital, angered by moves to extend the president's four-year term by another two years, moves that were opposed by the prime minister and the opposition.

That confrontation was resolved when the president put the prime minister in charge of security and organising delayed indirect elections.

Voting for lawmakers by elders had been due to be completed this week, with the election of a speaker and swearing in of MPs happening next week — in time for them to pick a president on Oct. 10.

But in a separate development on Monday, voting for members of the lower house of parliament was rescheduled to late November, causing a further delay to the whole process.

Somalia's semi-autonomous region of Puntland said on Friday it had sent forces to the neighbouring region of Galmudug to help the military there push ...
News
11 months ago

Al Shabaab fighters stormed a military base in the centre of Somalia on Tuesday and recaptured a town it lost to government forces earlier this ...
News
11 months ago