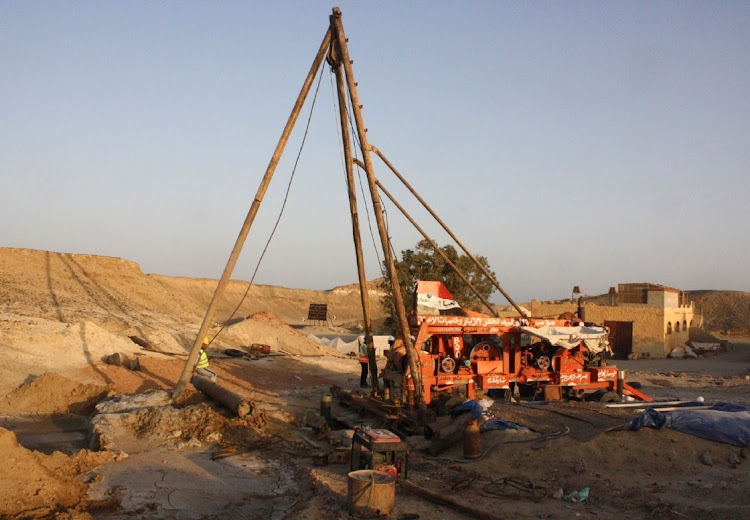 An 84m well being dug to draw sea water that will be desalinated using solar power at the resort area of Marsa Shagra near Marsa Alam on Egypt's southern Red Sea coastline on October 18 2021.
Image: REUTERS/Aidan Lewis

Water-scarce Egypt aims to more than quadruple desalination capacity by granting private companies concessions from its sovereign wealth fund to build 17 plants over the next five years with sustainable solar energy.

The plan fits into Egypt's push to diversify its sources of fresh water for a fast-growing population as it faces competition for Nile River water from the giant hydropower dam Ethiopia is building upstream.

The new concessions are designed to encourage private investment and technological development, both areas in which the Arab world's most populous country has struggled.

Investment in new desalination plants would be kick-started with the government guaranteeing to buy the water and re-sell it to domestic and industrial consumers at a steep discount that would entail a large subsidy, according to fund CEO Ayman Soliman. He declined to estimate the size of the subsidy.

The new plants would produce a combined 2.8-million cubic metres a day, an amount that would be doubled longer term. Egypt now has installed desalination capacity of about 800,000m3 a day and the government is targeting 6.4-million cubic metres by 2050, according to figures from the fund.

Sudan says Ethiopian dam made no affect on floods this year

The giant dam Ethiopia has constructed on the Blue Nile made no affect on this year's floods in Sudan, which had taken costly precautions in the ...
News
3 months ago

The military, which under President Abdel Fattah al-Sisi has been used to spearhead infrastructure development, has already built 27 desalination plants and private firms have installed some in resorts along Egypt's arid sea coasts.

Under the 25-year concessions, firms would bring in their own construction contractors and use high-yield renewables for energy. So far investor response has been strong, Soliman said.

“We've received offers to build whatever capacity we need. There is investor appetite to build three times as much.”

The wealth fund hopes to reduce an estimated capital cost of about $1,000 (R14,541) per cubic metre of desalted water by 20-25% by employing renewable energy, economies of scale in plant construction, and creative financing, including green finance.

“If you live in a compound, you're talking about 13 to 18 [Egyptian] pounds [R12-R16.87] per cubic metre, while the government tariffs are a tenth of that. There is a massive subsidy that is being built in,” Soliman said.

The Garden Route city of George wants to turn the grassy bank of its main dam into a mini-university town, complete with a commercial waterfront and ...
News
2 months ago

The subsidy would be built in as the difference between the cost the government will pay the concession owners for the water and the amount the end-consumer pays.

“Nile water is very cheap, but you want to diversify your reliance on sources of water,” he said.

Local solar energy producer and utility company KarmSolar was one of the first to say publicly it plans to bid for a portion of the project. It says it can cut costs by vertically integrating electricity, water and other utilities using renewables rather than acting as a single-service seller.

With solar plants scattered around sun-drenched Egypt, KarmSolar has begun building a 200m3 per day pilot desalination plant at Marsa Shagra on the southern Red Sea coast, where for five years it has used solar and diesel sources to supply electricity to local resorts.

“The machines for digging the wells are there, and we've put the orders for the procurement,” said Ibrahim Metawe, manager of the new plant, which is to begin pumping to clients by the first quarter of 2022.

The water intake wells lie a short distance inland from the sea to reduce the impact on the delicate marine environment. KarmSolar will then install turnkey, reverse-osmosis plants powered both by solar and electricity from the government grid.

Among options being explored are filling lorries with excess water produced when solar production is at its daytime peak to supply local construction sites, bottling it for sale or simply saving it for use at non-peak times such as night-time hours.

Solar will also be used for experiments with hydroponics to grow cucumbers, tomatoes and other produce that holiday resorts now transport in from the Nile valley at significant expense and loss of freshness.

The giant Itaipu hydroelectric power plant, wedged between Paraguay and Brazil on the Parana River, is facing an energy crunch amid record low river ...
News
1 month ago

We need to take action to address our imminent water crisis; time is running out.
Business Times
5 months ago