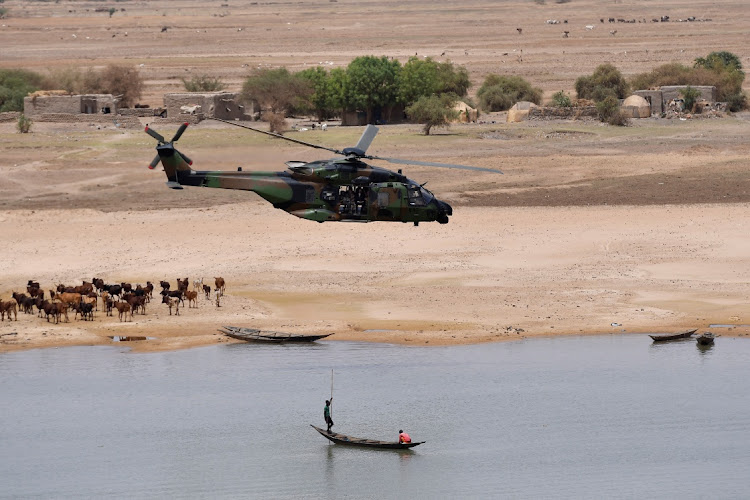 France is considering withdrawing its troops from Mali, but adapting its strategy to prevent Islamist militancy spreading south may prove complex and contribute to uncertainty in the region.

Relations between Paris and the junta in Bamako have deteriorated since it announced it would abandon some bases in the north of its former colony, reduce troop numbers and focus on hunting jihadist leaders in the region.

Facing the heat after rejecting planned elections this year, the junta has accused France of betrayal, splitting the country and spying, and even called France's foreign legion mercenaries.

All the while it was turning to Russia and Russia-linked mercenaries for help.

In January, France's vaunted Takuba mission, made up of European special forces to accompany Malian troops, was thrown into disarray when a Danish contingent was told to leave the country.

France's envoy in Bamako was also expelled after a war of words broke out between the two sides.

With tempers running high, some French officials suggested they may have no option but to withdraw from Mali completely, though the broader fight against Islamist extremists in the Sahel would continue.

French Foreign Minister Jean-Yves Le Drian said on Thursday a decision on the “adaptation” of forces would be made in weeks. He did not use the word “withdrawal”.

Leaving Mali, the epicentre for years of the militant threat, could have serious consequences, emboldening insurgents who already control large swathes of territory and stoking more migration from West Africa to Europe.

Diplomats and officials pointed out that despite the political standoff, French and European troops were still operating and co-ordinating well together.

On Feb. 8, the French military outlined details of a joint operation involving a French warplane, the Takuba force and Malian army which led to 30 suspected Islamist militants being killed.

“Leaving completely would be a mistake. We can't talk about security in the Sahel without focusing on Mali,” said a senior European diplomat, urging Paris not to rush a decision.

It's a tough call for French President Emmanuel Macron, who is expected to seek re-election in a few weeks' time and wants to underline his leadership credentials.

France had already cut troops in the Sahel with the aim of reducing numbers from around 5,000 to 2,500-3,000 by 2023. About half of its forces are based in Mali, so Paris would need to decide where to put them and maintain operational efficiency.

One possible destination is Niger, where Paris already operates fighter jets and drones. France's army minister visited Niamey in early February to discuss the evolution of France's military presence in the Sahel.

But Niger officials have in recent months balked at the idea of taking additional foreign forces.

And while anti-French sentiment is less intense in Niger than neighbouring Mali, it exists. A French military convoy was held up late last year with French troops firing shots and warplanes dropping flares to warn off civilians blocking the convoy.

A senior Niger counter-terrorism source did not rule out a French presence, but said there were domestic considerations to bear in mind, especially after recent military coups in Burkina Faso, Chad and Mali.

French special forces operate out of the country, but a January coup has destabilised the country. Public animosity towards France is apparent and the junta has shown no desire to increase co-operation in the near term.

A pullout from Mali would take several months anyway. That could leave the door open to talks, especially if the junta were to reconsider its election frame.

Should French troops leave, however, it would raise questions about the security of the 14,000-strong UN defensive peacekeeping mission MINUSMA.

A version of the existing European Takuba taskforce could be one solution.

The mission comprises 14 countries, mostly eastern European and Scandinavian. Its strength on the ground — about 600-900 — includes medical and logistical teams and has been more of a symbolic force accompanying local troops.

While there is concern among some Europeans about the political crisis in Mali and the presence of Russia and mercenaries, diplomats say there is no desire to leave Paris on its own, especially amid the crisis on Ukraine's borders that has left former eastern bloc states looking over their shoulder.

French officials believe the Takuba force could be adapted through an “a la carte” system whereby countries in the Sahel and beyond could tap European states for expertise, training or equipment.

Rather than having thousands of troops deployed separately from local forces, they would have a discreet presence to help guide them.

“It is not up to us to defend the population. It's up to national armies to do it. From now we will accompany them. Our new axis of co-operation is to make African armies more autonomous,” said a senior French military official.

A senior Ivory Coast defence officer agreed, adding that there were ongoing talks with France as it looked to adapt its counter-terrorism operation in the region.

The emphasis is to see how operations can be adapted to support countries in the Gulf of Guinea, notably Ivory Coast, Togo, Benin and Ghana, where there are concerns militancy is spreading due to porous borders, French officials say.

The Gulf of Guinea countries have seen sporadic attacks and created the Accra Initiative, a collaboration to prevent any direct spillover from the Sahel. Strengthening it with European support is seen by some as a likelihood.

But not everybody is convinced. One European diplomat pointed to the sensitivity of hosting foreign troops, adding that they could not simply be moved around like chess pieces.