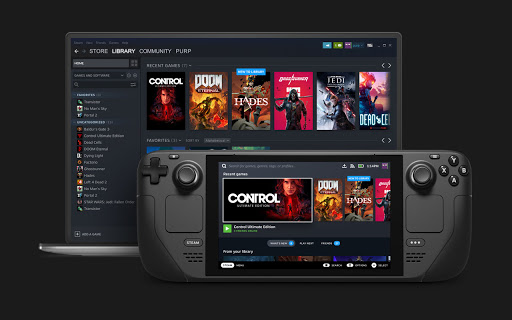 The Steam Deck was built for extended play sessions—whether you're using thumbsticks or trackpads—with full-size controls positioned perfectly within your reach.
Image: Supplied

There were rumours earlier this year hinting that Steam was working on some sort of portable gaming console. Little did we know it’s actually a full-blown computer running Steam OS. Put that in your console and smoke it.

The Steam Deck was designed by Valve and announced to Gabe Newell in an interview with IGN today. Newell said that the company’s biggest challenge was to create a handheld device powerful enough to run any game in the Steam library. He adds that the price point was secondary to the device’s performance, and they want PC gamers to pick up the Steam Deck and feel like it works just like they’d expect from a desktop PC. 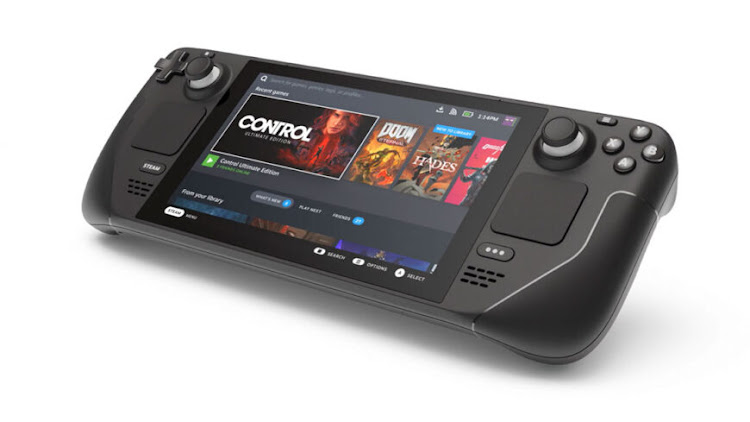 The Stream Deck is slightly larger than a Nintendo switch (and much heavier), and even though it runs Steam OS, you can install and run Windows on this device.
Image: Supplied

This portable game device features an AMD Zen 2 processor and GPU with AMD RDNA 2 architecture. It has a 7-inch display with a resolution of 1280×800 at a refresh rate of 60Hz. There’s 16Gb of memory, and you can choose between three storage sizes; 64GB, 256GB, or 512GB. Each version is expandable with a MicroSD card.

The Stream Deck is slightly larger than a Nintendo switch (and much heavier), and even though it runs Steam OS, you can install and run Windows on this device. That should not be necessary unless you want to tinker; Steam OS is optimised for the hardware in this device.

The only difference between the three models is the size of the storage and the speed at which the storage runs.

While the Steam Deck might look like a familiar console at first, it’s quite unique in a number of ways. For one thing, the d-pad, thumbsticks, and  ABXY buttons are placed along the top of the device with two trackpads just below it, on each side. On the back, there are also two shoulder buttons and two triggers on each side, and there is a gyro built-in for extra control should you need it.

There is Wi-Fi and Bluetooth for connectivity, and if you’re wondering about a sim slot, not luck. What you can do, however, is connect the Steam Deck to a keyboard and monitor and use it as a desktop computer with its Linux based OS. According to Valve, you can connect any peripheral and install any game or software you like, even Windows; this really is a portable PC. Windows and Linux apps will run through Proton so that you can check there for a full list of compatible games.

Valve's Steam Deck is a portable PC gaming Steam device coming soon. Is it a Nintendo Switch killer, or something else entirely? Let's dive into the announced information.

When it comes to battery life, Valve said gamers should expect between 2 and 8 hours of gameplay. You will also be able to play your Steam library save games, and switch between your desktop PC and your Steam Deck.

As far as consoles go, the Steam Deck seems to hit all the right marks for a truly open platform experience, but with such a massive library of games, you would not really need to venture outside of the Steam store unless, of course, you are looking for a title not found there. For many PC gamers, the fact that you can be in full control of your hardware will be a major selling point of this device.

The Steam Deck will cost $399 for the 64GB version, $529 for the 256GB version, and $649 for the 512GB version. There is also a dock on the way that will allow you to expand the devices’ connectivity options further.

The product is expected to ship at the end of the year, with pre-orders open for selected regions now. No word on a South African launch date yet.

OG and Elephant qualify for the Dota 2 International 10

Now, we look forward to The International 10, which will take place in Bucharest starting on 7 October 2021.
News
1 week ago

The International 10 for Dota 2 gets new dates and location

The International 10 is supposed to take place in Stockholm, Sweden, at the Avicii Arena. However, due to some issues which we outlined in a previous ...
News
2 weeks ago

Cold Iron Studios has dropped a new trailer for its bug hunt-’em-up, featuring some of the game’s hot Colonial Marine on Xenomorph action.
News
3 weeks ago

A Twitch streamer and her family in Gauteng were victims of a home invasion this weekend – in front of 48 viewers.
News
1 month ago