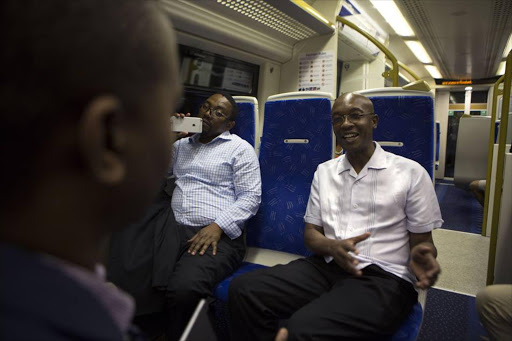 Parks Tau, makes use of public transport as part of the Ecomobility World Festival 2015 taking place in Sandton, Johannesburg. The festival offers residents and visitors an experience of a car-free precinct.
Image: LAUREN MULLIGAN

The City of Johannesburg is considering developing an integrated public transport system by linking Gautrain and its buses with minibus taxi services, Mayor Parks Tau said on Friday morning.

Tau was speaking at the conclusion of the Ecomobility World Festival in Sandton.

The 30-day festival saw parts of the Sandton Central Business District (CBD) closed off to private vehicles in favour of public transport use, cycling and walking.

"It proved to us that there is a clear need for safe, affordable and integrated public transport network. The city is progressively working towards this through the extension of Rea Vaya and the Metrobus service," Tau said.

Tau said some of the interventions introduced during the festival would be permanent features of Johannesburg's transport landscape.

He said, within five months, the city would reintroduce express lanes along Republic, William Nicol and Sandton Drive  to accommodate public transport and pool cars.

The city would also continue with "park and rides" in Brightwater Commons, Montecasino, Westgate and Emperor's Palace, he said.

"By June 2016 we will have completed new cycles lanes and widened sidewalks for pedestrians on both sides of West and Maude streets. A permanent cycling lane will also connect Rosebank and Sandton," Tau said.