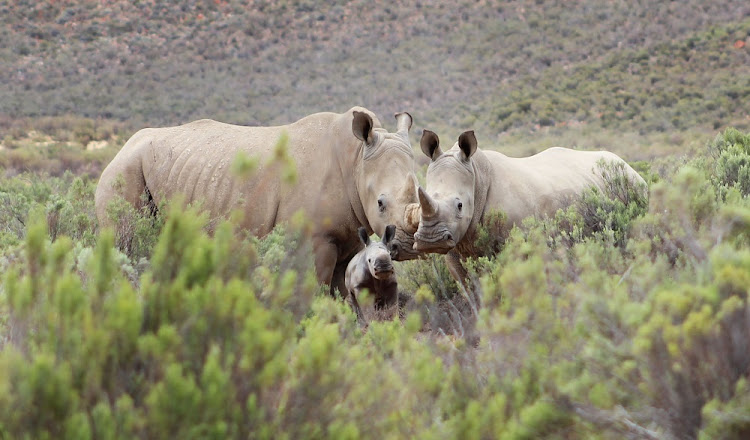 The mother and her two calves in the Aquila Private Game Reserve. The rhino cow gave birth on Sunday, 17 December, while still weaning her two-year-old calf, a female.
Image: Thaya Bedford

Christmas arrived early at the Aquila Private Game Reserve with the birth of a baby white rhino.

The rhino cow that gave birth on Sunday was still weaning her two-year-old calf‚ a female. The birth was unexpected because the mother of a calf is unlikely to mate with a male until her calf has left her to pursue its own life of independence.

The 10‚000 hectare reserve‚ in the town of Touws River‚ is home to the big five – elephant‚ lion‚ buffalo‚ leopard and rhino.

“It has been a remarkable few years for the rhino population at Aquila‚” said reserve owner Searl Derman. The private reserve’s rhinos are guarded by a sophisticated anti-poaching unit.

Female white rhinos are pregnant for approximately 16 months and give birth to a single calf. The calves are weaned at around two years of age and will stay with their mother until they are about three years old‚ said a statement by the reserve in the southern Karoo.

The surprise new-born’s gender is yet to be determined.