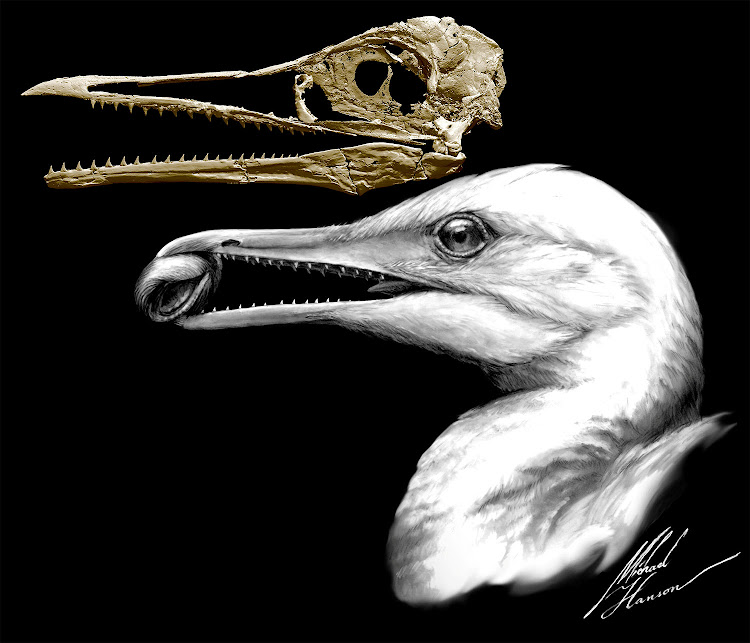 CT-scan-based skull restoration and life reconstruction of the toothed stem bird Ichthyornis dispar, a primitive seabird that prospered about 85 million years ago along the warm, shallow inland sea that once split North America, is shown in this image released on May 2, 2018.
Image: Michael Hanson and Bhart-Anjan S. Bhullar/Handout via REUTERS

A primitive seabird that prospered about 85 million years ago along the warm, shallow inland sea that once split North America boasted what scientists are calling a surprising blend of traits from its dinosaur ancestors and modern avian characteristics.

Four new fossils of Ichthyornis, which had both a beak and teeth and lived a lifestyle like modern gulls, offer striking evidence of this Cretaceous Period bird's important position in avian evolutionary history, researchers said on Wednesday.

While Ichthyornis fossils were first unearthed in the 1870s, the new ones from Kansas and Alabama chalk deposits, including a beautifully preserved skull, reveal far more about it than previously known.

Birds evolved from small feathered dinosaurs. Unlike the earliest-known birds like Archaeopteryx, which lived 150 million years ago, Ichthyornis was a strong flier, its body streamlined, simplified and adapted for flight like modern birds, Yale University paleontologist Bhart-Anjan Bhullar said.

Its primitive characteristics were largely in its skull.

"Despite the modernity of its body and wings, it retained almost a full complement of dinosaurian teeth, and it had a strong bite with large, dinosaurian jaw muscles. However, it perceived its world and thought like a bird, with a bird's enormous eyes and expanded, modern-looking brain," Bhullar added.

While older primitive birds like Confuciusornis, from 125 million years ago, sported a beak, the small one on Ichthyornis was the first known to have modern attributes like a "pincer tip" for grasping, pecking and fine manipulation.

"Its sharp teeth probably would have assisted in holding onto slippery marine prey, while the incipient beak at the tips of its jaws probably would have allowed it to manipulate objects with fine dexterity such as modern birds can do, and preen its feathers," University of Bath paleontologist Daniel Field said.

Ichthyornis was the size of a tern, with a 60-cm wingspan, and probably ate fish and shellfish. It shared the skies with flying reptiles called pterosaurs when dinosaurs dominated the land. Toothed birds vanished along with the dinosaurs and many other species after an asteroid impact 66 million years ago.

Fossils like those of Ichthyornis and Cretaceous toothed diving bird Hesperornis were cited by 19th century naturalist Charles Darwin as strong support for his theory of evolution.

"Ichthyornis shows the ways in which evolution is both complex and elegant, permissive of individual changes and massive integrated transformations," Bhullar said.

The research was published in the journal Nature.

The discovery of the fossilised remains of a new species of dinosaur in the Sahara Desert has been described as a crucial “edge piece” of a largely ...
News
4 years ago

Print your own 3D dinosaur skull at home

You can now print a 3D skull of a 200 million-year-old dinosaur that once roamed the South African plains at home.
News
4 years ago