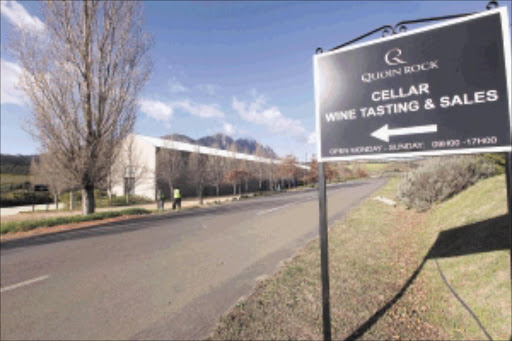 Businessman Dave King acted in spite when he tried to sabotage the SA Revenue Service's latest attempt to attach his wine farm, a SARS official claimed.

The farm, which produced a limited series of wines for golf legend Gary Player, was attached in compliance with a court order the receiver applied for on Friday.

The taxman claims that King owes R900-million and that Ben Nevis Holdings, a company owned by Glencoe Trust, of which King is a beneficiary, has tax arrears of R2.7-billion.

Another of King's companies, Quoin Rock Winery, is alleged to owe the taxman about R47.3-million.

Metlika Trading is the majority shareholder of Quoin Rock, Stellenbosch.

Last month the receiver certified Quoin Rock's indebtedness in the Pretoria High Court and, last Tuesday, the sheriff attached the movable assets of the winery.

"I communicated with you some time ago regarding the fraudulent tax assessments raised against Quoin Rock," King wrote.

"Surprisingly, SARS has belatedly acted on the fraudulent assessments by instructing the sheriff to attach the moveable assets of the winery prior to the fabricated assessments being tested before the court."

King warned that he had alerted the winery's GM and bookkeeper that the receiver had taken over the business, and that he had told the manager that employees would no longer be paid.

"There will be no workers on the farm from tomorrow. This will have a massive impact on the vines and can, within days, become terminal," he said.

"The winery will be securely locked as there will be no security. Wineries are an easy target. Once word gets out, [it] will be at immediate risk."

King went on to warn that the taxman would have to pay Eskom because, without electricity, all the stored wine would rapidly be ruined.

King has left the country.

The receiver made an urgent application to the Pretoria High Court on July 1, asking for the provisional winding up of the winery.

The receiver asked that an independent liquidator be appointed "immediately to safeguard its assets to ensure that damages and decay of . perishable goods [does] not occur," SARS financial investigations co-ordinator Pieter Engelbrecht said in court papers.

The order was granted and liquidator Cloete Murray flew to Cape Town.

By then, all the workers, the farm manager, the viticulturist and the wine-maker had been paid off.

Murray told the employees to return to work on Monday.

Engelbrecht told Judge Andre Louw in the high court that King's actions were motivated by malice.

Gauntlett described King as acting out of spite and "obstreperousness".

"It reminds one of the farmer who, in order to escape paying tithe, destroyed his whole crop," said Gauntlett.

Engelbrecht told the court that King was acting the same way in the winery liquidation.

The winery has failed to submit tax returns since 2002.

King's lawyer, Dale Cohen, is overseas and could not be contacted, and his secretary, Sue-Marie Saayman, said King was not available for comment.

Doug Murdoch, GM of the winery, said: "At this point, we intend to stand by [King] and maintain and preserve his assets as best we can.

King has until July 19 to contest the final winding up of the winery.