It is without doubt one of the grimmest stories of rape that has emerged recently in South Africa. 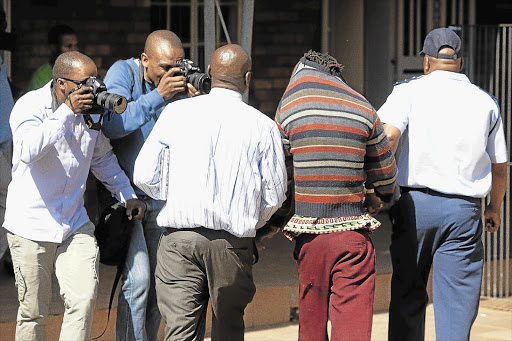 Press photographers try to get a picture of the man with whom the 17-year-old gang-rape victim was found in Soweto yesterday. She had been missing for weeks

Press photographers try to get a picture of the man with whom the 17-year-old gang-rape victim was found in Soweto yesterday. She had been missing for weeks

But it is also one of the most tragic stories of neglect and abuse of a mentally handicapped teenager in one of the country's biggest townships.

Yesterday, South Africans awoke to a brutal story: a 17-year-old with the mental ability of a five-year-old had been gang-raped by seven young men who had offered her R2 for their violent pleasure.

Exacerbating her humiliation, they had video-taped the brutal attack and the images have since gone viral across the country.

Police are investigating the existence of a second video of another rape of the girl.

This is a story of complicity, gender violence and neglect in Soweto and is, in all likelihood - to varying degrees - representative of what so very often happens to girls and women at the hands of this nation's men.

The complicity lies in the fact that a community knew this teenager, a child really, and must have known she had previously disappeared for weeks on end. She had apparently been raped several times since 2009. But no one seems to have found it necessary to report this to the authorities.

Then there is the mother, whom police initially said might be investigated for alleged neglect.

She had initially told the media and police that she had reported her daughter missing but had been turned away.

But when Gauteng community safety MEC Faith Mazibuko demanded answers from senior Soweto officers yesterday, she was told the mother's claim was a "blatant lie".

Soweto police cluster commander Major-General Nkanyiso Maphango said: "She has reported her daughter's four previous disappearances, but not this one.

"It is a blatant lie. She will be investigated."

But last night, police spokesman Warrant Officer Kay Makhubela denied charges of child neglect against the mother were being investigated.

"The woman was traumatised and we referred her to social workers," he said.

Earlier, MEC Mazibuko had launched an attack on the parents of the teenager and the seven suspects who have been identified by the community and arrested. One alleged rapist, a 14-year-old minor, has been left in his parents' care.

"This is horrendous. How can a mother not report their child missing," asked Mazibuko.

"She never reported her daughter missing, yet she blames the criminal justice system for failing her and her family," the MEC said.

"Also, how can a 14-year-old do this? What are parents doing to allow their children to do this?

"Where is family discipline?" she asked.

But perhaps most tragic of all is the way that the 17-year-old was discovered yesterday.

As police officers moved through the township, using loud hailers to ask community members to come forward with information about the missing girl, she was brought from a 37-year-old man's one-roomed home.

He claimed she was his "girlfriend" and that she had arrived at his house on Monday.

Hungry, dazed and confused, the girl was yesterday unable to recall her whereabouts.

Police spokesman Makhubela said investigators were seeking information about everything that had happened to the teenager since she had disappeared.

Makhubela said the seven youths had been arrested after the community provided police with information. The 37-year-old man has also been arrested.

"This investigation is not over yet. We are expecting to make more arrests as information is gathered," Makhubela said.

The teen's mother had told police she had reported a previous rape of her daughter.

Johannesburg mayoral committee member for public safety Matshidiso Mfiko said: "She told us one of the court cases, against a Zimbabwean, was dismissed because of her daughter's mental state. She apparently could not testify.

"MEC Faith Mazibuko will engage with the National Prosecuting Authority to ensure this doesn't happen again.

"The investigation will be difficult because the girl can only tell us she was with friends. She doesn't know who these friends are or where they live," Mfiko said.

While the suspects will appear in court this morning, the girl has been taken to a place of safety.

Mazibuko has called on the public to attend their appearance in the Roodepoort Magistrate's Court to send a message.

"We must not tolerate this," she urged.

Last night, the residents of this Soweto community slept lightly. The home of one of the suspects had been set alight earlier - already a sign that the community would not tolerate "this".