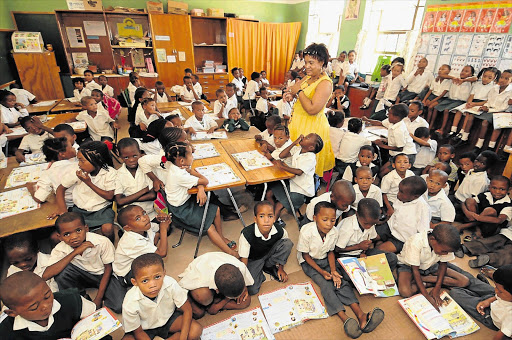 Overcrowding in KwaZulu-Natal schools has reached alarming proportions - 670000 pupils are being taught in classrooms of more than 55 pupils each, the DA claimed yesterday.

But the provincial department of education has denied the claim.

"There's no such. They are just politicking. They must give us a list of those schools," the department's spokesman, Muzi Mhlambi, said yesterday.

The DA insisted that the shocking figure was taken from a reply given by education MEC Senzo Mchunu to a question asked in the legislature.

The DA said there were 680 schools at which there were more than 40 pupils in a classroom and 13 schools with no classrooms at all , affecting 2134 pupils.

"With conditions such as these, there can be little meaningful interaction between [pupils] and teachers.

"[Though] we accept that there's a lack of infrastructure in many rural schools, this is unacceptable. We need to use prefab buildings in our schools as a short-term measure," the DA's provincial spokesman on education, Tom Stokes, said.

He said one of the problems facing principals was pressure from parents to admit their children even when the classrooms were full.

"Principals need to be given the authority to say 'no'. We need to put our foot down and say each classroom must have at most 40 pupils," he said.

Phesheya Primary School, in uThungulu District, can accommodate only 1200 pupils but its enrolment has shot up to 1922.

Zwelithini High School has room for 612 pupils but has enrolled 1 005.

"Quite clearly, we are sitting on a powder keg and the fuse has been lit," Stokes said.

That 14000 of the country's 80000 educators were either unqualified or under-qualified added fuel to the fire, he said.

Education expert Volker Wedekind said this was an "impossible scenario for teachers to deal with". He said an acceptable teacher:pupil ratio was between 1:25 and 1:35.

"More than that is a problem."