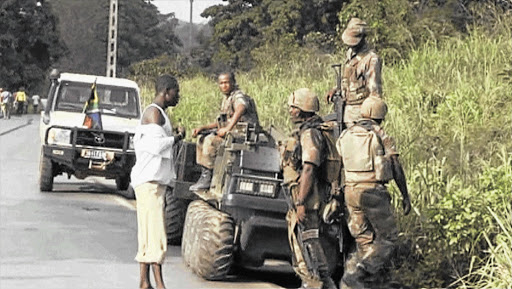 The French dubbed it the neglected Cinderella of their African colonial empire; modern observers have called it a "phantom state".

Landlocked, isolated and poverty stricken, despite its reserves of gold, timber, uranium and gem-quality diamonds, the Central African Republic has been racked by debilitating rebellions for more than a decade.

In the latest revolt, fighters from a loose rebel alliance demanding an end to years of exclusion from government seized control of the riverside capital, Bangui, on Sunday, forcing President Francois Bozize to flee.

Bozize's toppling by the rebel Seleka coalition is another setback for efforts in Africa to build solid foundations of constitutional rule to accompany the continent's buoyant economic growth in an otherwise troubled global economy.

It is particularly embarrassing for South Africa, which is trying to project itself as an influential regional power this week as it hosts a summit of the Brics countries and welcomes new Chinese President Xi Jinping on his first visit to Africa as head of state.

South African troops, in the Central African Republic under a defence cooperation agreement, suffered losses fighting alongside government soldiers in a failed attempt to stop the rebels entering Bangui and keep Bozize in power.

Though lacking the strategic attention gained by other African hotspots, such as Mali, Somalia and eastern Congo, the Central African Republic is a festering sore of instability at the heart of an economically rising continent.

Some of the root causes of this lie in a colonial history of isolation and neglect. This was compounded after independence in 1960 by coups and bloody mutinies, French military meddling and rule by one of the world's most bizarre and extravagant dictators, Jean-Bedel Bokassa, self-styled Emperor Bokassa I.

Bozize, a military strongman who was a general in Bokassa's 1977-1979 "empire" and seized power in a 2003 coup before winning a 2005 election, opened a so-called inclusive political dialogue with his rebel foes in 2008.

But his failure to deliver genuine power sharing, followed by his re-election in disputed 2011 polls that the opposition boycotted, alleging fraud, led directly to the offensive by the Seleka coalition of five armed rebel groups.

Fighters from Seleka, which means "alliance" in the local Sango language, had closed in on Bangui in December, forcing Bozize to agree to a mid-January power-sharing deal that led to the formation of a national unity government.

But last week the rebels ended the ceasefire accord, accusing Bozize of failing to keep his promise to send home the South African troops - whom they regard as mercenaries - and incorporate 2000 rebels into the army.

"There is a frustration that has grown and grown with Bozize's way of governing, which has been very uninclusive," said Louisa Lombard, a post-doctoral fellow at the University of California, who has studied the Central African insurgencies.

Experts point to the absence of economic development and government control in the CAR's bush interior as a major driver of discontent and revolt in a nation slightly bigger than France but with a population of only 4.5million.

CAR's extensive borders have been porous and unprotected, with armed intruders from Chad, Sudan and the Democratic Republic of Congo crossing at will to raid villages and poach wildlife, joining local bandits known as zaraguinas .

A 2009 US diplomatic cable from Bangui bluntly calls the Central African Republic "a country defined by its borders on the map and not by effective state control of its territory".

The Brussels-based International Crisis Group called it "a phantom state" in 2007. It has the dubious distinction of being the state that has experienced the most French military interference in the continent's post-independence history.

French soldiers, known locally as "barracudas" after France's 1979 Operation Barracuda regime change intervention, which removed Bokassa from power, have over the years installed and ejected CAR leaders and helped quash rebellions and mutinies.

As recently as 2006 and 2007, French Mirage jets helped government soldiers repel insurgents in the restless northeast.

But though France launched a major military intervention in the Sahel state of Mali in January to drive back al-Qaeda-linked Islamist fighters it considers a serious regional threat, President Francois Hollande has made it clear that he does not view the revolt against Bozize in the same strategic light.

Despite appeals by Bozize to "our cousins" Paris and Washington for help, France has insisted that its several hundred troops in its landlocked former colony are there solely to protect French nationals and interests, not the local government.

France said on Sunday that it would send more troops to Bangui to protect its more than 1000 citizens there. - Reuters