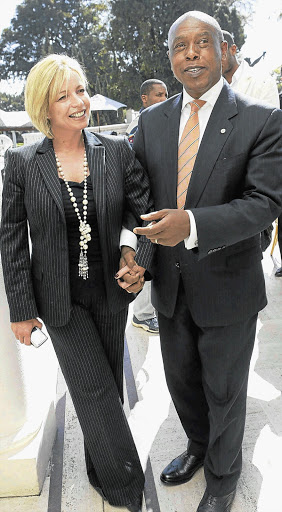 Tokyo Sexwale's divorce got a whole lot messier late yesterday when the lawyer of his estranged wife, Judy, accused the minister of human settlements of attempting to blackmail her with allegations of using hardcore pornography.

Divorce lawyer Beverley Clark said her client, Judy Sexwale, "now had no choice" but to bring an urgent application for an interdict against her husband.

Sexwale, who is locked in a bitter divorce from his wife of 20 years, is alleged to have phoned a family friend of Judy Sexwale on Monday, accusing her and a former security guard of using hardcore pornography.

On Friday, Sexwale is said to have repeated the story to a second family friend - this time showing him "evidence" he claimed to have found in e-mails.

In a statement issued yesterday, Clark said: "As such, Mr Sexwale has left Mrs Sexwale, to her deep regret, with no choice but to approach the court for an urgent interdict to stop the further dissemination of this material and any further allegations that she has been involved in such activities."

According to the statement, Sexwale had threatened to release "evidence" because "he has been pushed too far" by Judy Sexwale.

Clark says in her statement that Sexwale told the family friend that the Sunday Times had "attacked" him last weekend and that he had been "pushed too far".

He apparently blamed his wife for the articles.

"In my and Mrs Sexwale's view, and consistent with past conduct, Mr Sexwale is trying to blackmail Mrs Sexwale and to pressurise (sic) her to back down in the divorce proceedings.

"Mr Sexwale apparently wants his wife to relinquish her patrimonial claims and to stop any further scrutiny of the two trusts in which all the parties' assets are housed," Clark's statement reads.

The lawyer said Judy Sexwale had never been involved in creating or disseminating pornography of any sort.

"Mrs Sexwale states that these e-mails, to the extent that they exist at all, have been fabricated by Mr Sexwale and/or another party acting for him," the statement says.

"My client is shocked and outraged to see the extent to which her husband will go in order to make her submit to his will, even to the extent of damaging his own children by smearing their mother in this way."

According to Clark, Sexwale informed a family friend on Monday that he had found a "damning series of e-mails" that he said had been exchanged between his wife and a personal security assistant, featuring illegal hardcore pornography.

"Mr Sexwale claimed to have found this material on a computer in his Sandhurst home," Clark's statement reads.

She wrote to Sexwale's lawyer, Billy Gundelfinger, on Thursday this week, requesting:

Clark said Gundelfinger had told her on Friday morning that Sexwale had "no intention to blackmail" his wife and that the family friend must have misconstrued what he said.

Gundelfinger is said to have told Clark that Sexwale had obtained the "evidence" through "an anonymous delivery".

In her statement, Clark says she and Judy Sexwale felt assured after her conversation with Gundelfinger that Sexwale would not use the "offensive e-mails".

But on Friday Judy Sexwale received a call from another "close mutual friend".

According the statement, "Mr Sexwale had shown this offensive material [to the mutual friend] and made the [same] allegations about having recently found it on a computer in the Sandhurst home. He again threatened to release it to the press."

In her statement, Clark says the minister believed that the Sunday Times was "attacking" him.

The Sunday Times published articles last week identifying most of the South African properties owned by the Sexwales. The couple, married in community of property, are among the richest in South Africa. Sexwale declared his wealth in 2009 to parliament as being about R2-billion.

Judy Sexwale, according to the law, is entitled to half of their wealth and assets when they divorce.