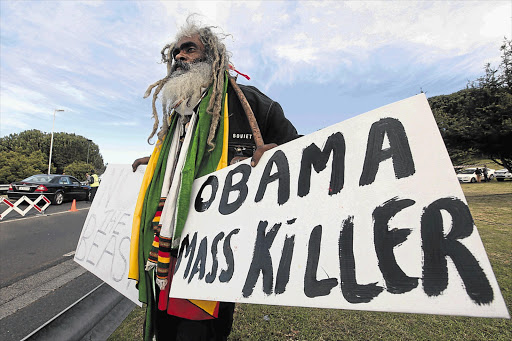 A demonstrator outside the University of Cape Town, where US President Barack Obama spoke yesterday
Image: ESA ALEXANDER

Just hours before US President Barack Obama mounted the podium at the University of Cape Town about 50 people protested outside the campus, shoes in hand, calling for his head.

"Take off a shoe. Remember the journalist who threw his shoe at [George] Bush? Let's do the same in solidarity," Shaheed Mahomed, organiser of the NObama Coalition Cape Town, told the protesters.

From a bridge over the M3 some protesters waved Palestinian flags . One poster read: "Obama is on the payroll of the Pro-Zionist Capitalists."

Yushra Adams said she was protesting because Obama "has blood on his hands".

The Obamas' first stop was Robben Island just before 11am. Later they visited the Desmond and Leah Tutu Treatment Centre, which cares for HIV/Aids patients in Masiphumelele township.

At UCT Obama told a packed Jameson Hall: "There's no question, Africa's on the move, but it's not moving fast enough. We've got more work to do because Africans must not be left behind. That's where you come in, young people."