'Comrade Mao has ruined my marriage' 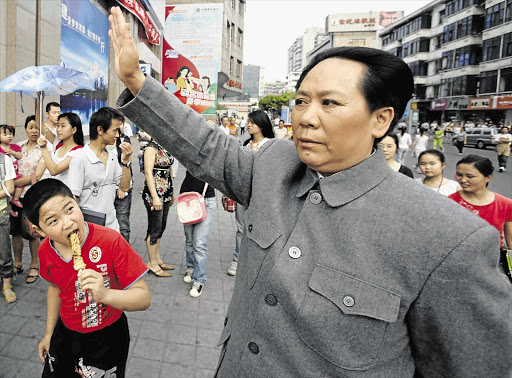 She is a 57-year-old shopkeeper who transformed herself into China's first and only female impersonator of Mao Tse-tung.

But though Chen Yan's career as a Mao Tse-tung lookalike has brought her fame and a measure of fortune, it has also wrecked her marriage, a Chinese magazine claimed yesterday.

For Chen's husband had grown tired of feeling "he is sleeping with [the] chairman", the Global People magazine said.

"Mao is a great man and she is a woman."

Chen Yan's transformation into the Great Helmsman began in 2006 when she appeared on a televised talent show and was asked to impersonate the award-winning actor Tang Guoqiang, who is famous for playing historical figures, including Mao.

Chen was eliminated but returned to her home in Mianyang to find that her "Mao face" had made her a local celebrity.

Buoyed by her new-found fame and sensing there was money to be made from impersonating China's chubby-faced revolutionary leader, Chen set about transforming herself into Mao.

Chen gave up wearing skirts after fans began accosting her in the street with the question: "How can you wear skirts when you are playing c hairman Mao?"

Chen's makeover paid off: property developers and department stores beat a path to her door hoping to use her uncanny likeness to Mao to sell their products.