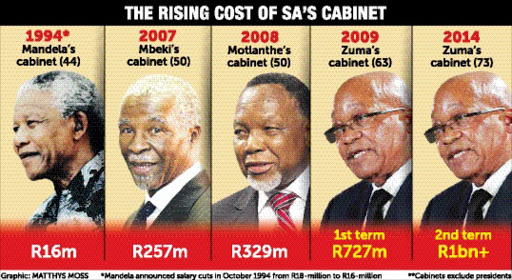 He has added two ministries .

His cabinet is one of the biggest in the world - he has more cabinet ministers than the US, Germany and Japan, all of which have much bigger economies and broader tax bases.

Economist Mike Schussler said: "I'm not sure if a bigger cabinet is going to make a difference or just add to the cost of government."

The budget for The Presidency has soared from R257-million in 2007, during president Thabo Mbeki's tenure, to R329-million in 2009.

Kgalema Motlanthe held office from September 2008 until elections brought Zuma to power in May 2009.

It is estimated that the allocation for The Presidency will rise to R1.3-billion in the next three years.

Steel and Engineering Industries Federation of SA CEO Kaizer Nyatsumba told the SABC that the federation was worried about the ever-expanding cabinet growing despite a small tax base and an under-performing economy .

US President Barack Obama, who presides over one of the biggest economies in the world, earns just over R4-million a year.

Obama's 15-member executive is not given perks such as housing and free flights as in South Africa.

India's new prime minister, Narendra Modi, is perhaps the most modestly paid head of state. He will earn just under R30000 a month.

Modi this week shrank his cabinet from 71 to 46 members.

The Economic Freedom Fighters said that, with perks and support staff, the cost of Zuma's executive could hit R1-billion a year.

"Almost R1-billion is spent on this permanent government mass meeting of ministers before we can even think of core functions and programmes that change lives," said EFF spokesman Mbuyiseni Ndlozi.