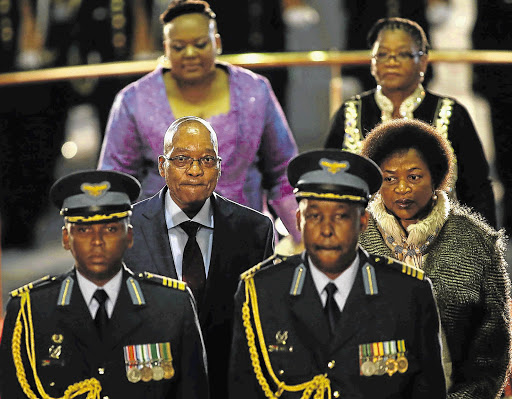 TIGHT-LIPPED: President Jacob Zuma ahead his State of the Nation address at parliament in Cape Town. Some of his cabinet appointments appear to place loyalty well above competence
Image: ESA ALEXANDER

Just a month into his second term, President Jacob Zuma is politically exposed and his former friends are calling him names in parliament. Already, many within the ruling party have begun contesting for his position.

His performance in parliament last week was dismal and underlined what some of us have said since 2005, when Thabo Mbeki fired him: he is not fit to govern and is not fit to walk in the shoes of Oliver Tambo and Albert Luthuli. His first term as chief executive of South Africa Incorporated was an absolute disaster. His second will be worse.

His new cabinet is possibly the worst to sit around a table in the boardrooms of the Union Buildings since democracy dawned. It is a collection of cronies, incompetents and yes-men. It is a cabinet in which the few talented and worthy individuals are overwhelmed by the compromised.

Zuma stood up in parliament last week and brazenly told us something we all know - we have run out of electricity. The only reason we still have lights on in our homes is because Eskom is diverting electricity to consumers while the mines and other big users are being starved of the stuff. Expect major outages when the platinum miners go back to work.

Now, you would think that a president would send his best people to deal with the sort of energy crisis we face.

Zuma did, after all, spend the biggest chunk of his speech going on about our energy challenges. How does he solve this clear and present danger?

He has appointed possibly the most controversial, divisive and incompetent minister of his last administration, Tina Joemat-Pettersson, to the energy portfolio. You have to wonder what kind of sick joke is being played on the electorate. In her report in December, Public Protector Thuli Madonsela said Zuma should act against Joemat-Pettersson because of her "reckless dealing with state money and services, resulting in fruitless and wasteful expenditure, loss of confidence in the fisheries industry in South Africa, alleged decimation of fisheries resources in South Africa and delayed quota allocations due to lack of appropriate research".

But Zuma went and appointed her to what is potentially the most critical job in his administration. Within days she was telling the world that South Africa will be building a nuclear power plant.

And who will be building this facility? Ah, President Zuma's new best friends, the Russian government. Let me give you a prediction, dear reader: In 2030 there will be a commission of inquiry in South Africa investigating "corruption related to a trillion-dollar nuclear deal". This is another arms deal in the making. Mark my words.

You have to wonder who advised Zuma on some of his appointments. Siyabonga Cwele? Faith Muthambi? Nathi Mthethwa? It boggles the mind.

When he has a clear opportunity to do something extraordinary, the man chokes.

Why is an announcement that Deputy President Cyril Ramaphosa will run the National Development Plan not explicit in Zuma's speeches? As usual, on this issue Zuma has done what he does best, he has poured uncertainty into the milieu.

On May 25, announcing his new cabinet, he said: "The National Planning Commission, as well as the performance monitoring and evaluation ministries in The Presidency, have been combined into one ministry to harmonise the planning and monitoring functions."

He announced that the man in charge of this ministry is Jeff Radebe.

Last weekend the ANC, reacting to the bad news that two international ratings agencies found our economic future bleak, issued this statement: "The Deputy President, Mr Cyril Ramaphosa, has been assigned the task of chairing the National Planning Commission and has overall oversight of the implementation and enforcement of the NDP across government."

What is going on here? Does Zuma's left hand know what the right hand is doing? I don't think so. In fact, I think some distance is beginning to emerge between Zuma and his party. It seems to me the ANC wants some leadership, whereas Zuma prefers to keep things murky and divisive while he rules the roost. It is absolutely the wrong way to run a country.

Thankfully, it seems as if some in the ANC are waking up to the fact that the man is a liability. As a clearly ailing Zuma hobbled into parliament last week party branches across the country were beginning to caucus about who should succeed him when the party conference is held in December 2017.

The powerful KwaZulu-Natal branch could push for Nkosazana Dlamini-Zuma or Zweli Mkhize.

But the North West, Gauteng, Eastern Cape and Limpopo branches are saying Ramaphosa should be given a chance. Ramaphosa needs to send them a signal that he is ready to run.

Crucially, KwaZulu-Natal ANC leaders are saying they are prepared to back Ramaphosa, but would want to have Mkhize as his No2. This is where the sticking point lies: a place has to be found for ANC secretary-general Gwede Mantashe, at present the most powerful man in the party.

It will be an interesting race, but Zuma could lobby hard for his former wife to succeed him.

Meanwhile, South Africa will just have to grit its teeth for another five long years with the liability that is Zuma.