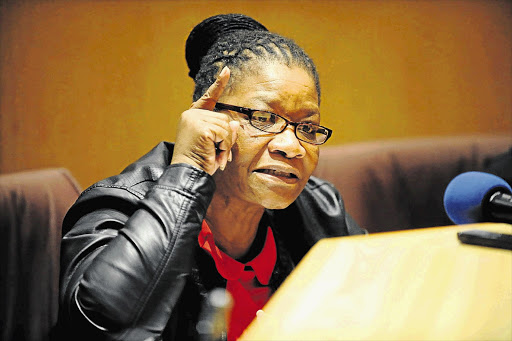 Thandi Modise, chairman of the National Council of Provinces, is facing charges of animal cruelty in connection with the death of animals on her farm.

At the SPCA, the property, not far from Parys, became known as "the little farm of horrors", a place were the stench of decay hung as the society's inspectors worked to save what still lived.

The smell came from a sty in which the bodies of 53 pigs lay rotting.

There were more bodies - 19 sheep and goats, a goose and seven chickens - scattered across Danmel, the North West farm owned by Modise.

They died from starvation and thirst. The pigs, in an effort to survive, ate the dead and foetuses. None of the pigs could be saved.

Modise said yesterday that she would co operate with the investigation and that she was "saddened by the abandonment and trauma that the livestock suffered after workers employed on the farm unceremoniously left without notice".

She added, "The suffering the animals endured does not compare to the financial loss that I have suffered."

SPCA staff working at the farm said it was the worst neglect they had seen.

"What is different is the number of different species affected. Just how can someone walk away from this?" said Venter.

The SPCA went onto the farm on Saturday after a tip-off from a vet in the area.

For two days SPCA staff saved the animals they could and destroyed those they could not.

Day three of the operation, yesterday, concentrated on moving the sheep and goats to safety.

Thick wool hid signs of malnutrition but one of the sheep collapsed as it moved towards a pen.

It could not be saved and Venter was forced to euthanase it.

As the SPCA workers were loading a trailer with sheep and goats, a man, Slim Mogale, who claimed to be Modise's cousin, tried to stop the removal of the animals.

He was threatened with arrest and backed down.

Mogale said he had been sent by Modise from Cape Town to deal with the problem.

He told The Times that he had last been to the farm a month ago. Everything then was "fine", he said.

Modise bought the farm four years ago and had plans to retire there, he explained.

He blamed the farm manager and workers, whom he said had disappeared. He also said a flat-screen TV had been stolen.

Modise said the farm was supervised by a temporary manager because the regular manager had taken leave two weeks ago.

"I had for the past three years visited the farm on a fortnightly basis and took a personal interest in what was happening, and in my absence made arrangements for the livestock to be well looked after until this tragic and unfortunate incident," she said.

"It came as a shock when I learned of the desertion [of the farm employees] from the SPCA," the former North West premier said.

Modise has appointed vets to assess the condition of the animals remaining on the farm.

An environmentalist has been brought in to assist with the disposal of carcasses.