Sasco to shut down all campuses in 'blackface' protest 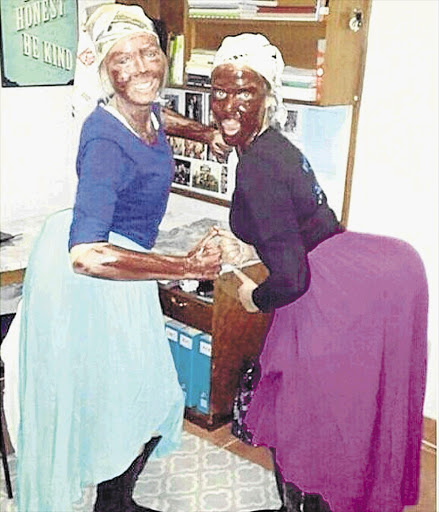 VIRAL: The controversial photo of University of Pretoria students at a 21st birthday party.

South Africans of all walks of life need to rally against racism at universities, the SA Students Congress (Sasco) said on Tuesday.

"We are not only talking about students, but our sisters and brothers, mothers and fathers and all people living in this country. The so-called black face incident where two white students depict themselves as black domestics is an insult to black people," Sasco president Ntuthuko Makhombothi said in Johannesburg.

He was referring to an incident where two white female students in domestic worker outfits recently posed a photo with their faces and arms smeared with black paint. The photo was widely published in newspapers and on social networks.

The students' action was considered racist by many people commenting on social networks with the hashtag #blackface.

"We are seriously considering having a nationwide campaign against racism in our universities, more particularly the University of Pretoria where this incident took place, Makhombothi said.

"We are calling on the permanent expulsion of those two racist students who insulted our black parents in a manner reminiscent of the oppression of Saartjie Baartman."

Sasco will "shut down all campuses" in the week of September 16 to rally against racism and to demand free education.

The two students, who took the picture at a private 21st birthday party, were temporarily suspended from their residences on Friday, but not from the university itself. A full disciplinary investigation will be held.

The SA Human Rights Commission on Thursday also launched an investigation into the matter.

"While the commission has still not received a complaint in this regard, the commission decided to launch an own initiative investigation," spokesman Isaac Mangena told Sapa at the time.

It will culminate in a march to the department of higher education in Pretoria to demand free education from minister Blade Nzimande, Makhombothi said.

He said the conduct of universities of punishing students for fighting for their rights was out of order and a backward way of dealing with their concerns, giving recent protests at the Medical University of SA (Medunsa) and the Central University of Technology as examples of this behaviour.