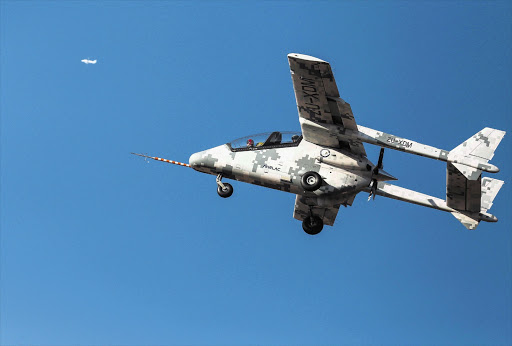 Designed and constructed by Paramount at Wonderboom Airport in Pretoria, the first military aircraft to be built in Africa took to the skies yesterday. It is equipped with a 20mm cannon and state-of-the-art sensors and radar
Image: Moeletsi Mabe

Taking to Pretoria's skies, the AHRLAC - Advanced High Performance Reconnaissance Light Aircraft - was unveiled yesterday by developers, Paramount Group, to the public for the first time.

The 100% privately funded AHRLAC can be fitted with sizable firepower enough to "pack a punch" far above its size.

For Ichikowitz it's a project which has been well worth the wait.

It cost: Hundreds of millions of rands, says Ichikowitz with a smile.

As the aircraft taxied to a halt at its hanger at Wonderboom Airport outside Pretoria, Ichikowitz, along with South African aeronautical engineering and manufacturing company, Aerosud's head, Paul Potgieter, high-fived each other.

The operation specialist aircraft, which comes in both basic and sophisticated versions, is hoped to take the global aerospace industry by storm.

Designed for multiple roles it is, according to developers, up to the task. From anti-poaching missions, the patrolling of borders for drug smugglers, gun runners and terrorists, to conventional battles and anti-piracy operations, the 4-tonne fixed wing aeroplane can do just about anything.

"Its capabilities are endless. It is a force multiplier and a force to be reckoned with. In terms of armaments and capabilities it packs a punch, far above its size," said Potgieter.

He said its surveillance capabilities were hi-tech.

"It is the combination of everything …a drone, advanced trainer aircraft to a fighter of insurgents and provider of assistance in emergency disaster relief. Highly tactical with the ability to change roles rapidly. On top of that it is cost effective," said Potgieter.

For now its exact production date is being kept secret, although the first plane is expected to role off the manufacturing floor within two years.

Ichikowitz said it was a truly historical moment for South Africa and Africa's aerospace industries.

"It is not so much what is going to happen with this aircraft, but what will happen around the AHRLAC that is really exciting. It is the rebirth of dormant skills, which a number of people thought were gone forever.

"Africa suffers from huge self doubt, but AHRLAC shows the continent is a huge global player. This aircraft is relevant to the threats and disasters posed not just to Africa but to the entire world," he said.