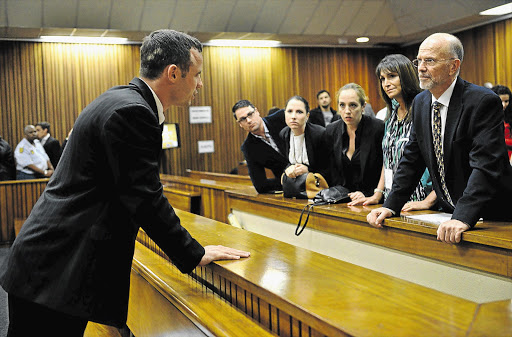 ACROSS THE DIVIDE: Oscar Pistorius talks to family members during a break in his murder trial. Those in the picture include his brother Carl, far left, his sister Aimee, next to Carl, and his uncle Arnold, on the right.
Image: ANTOINE DE RAS

Oscar Pistorius’s family say he has been receiving psychotherapy from both his own psychologist as well as prison psychologists and a social worker.

Issuing a statement on the Parole Review Board’s decision yesterday to set aside his release on parole into correctional supervision‚ and ordering him to undergo psychological treatment‚ the family accused the authorities of being unfair to the former Paralympian due to the hype around him.

“The failure to give proper - and consistent - effect to the Correctional Services Act flies in the face of administrative justice‚” Anneliese Burgess‚ spokesperson for the Pistorius family‚ said in a statement.

“This experience leaves us with the uncomfortable conclusion that the public‚ political and media hype that was allowed to develop around Oscar’s trial has undermined his right to be treated like any other prisoner - as per the prescripts of the Correctional Services Act.”

The review panel said yesterday that the earlier decision to parole Pistorius was premature. Instead‚ it recommended that he undergo “psychotherapy in order to address criminogenic factors of the crime he committed”.

In response‚ the family said: “We would like to emphasise that Oscar has been receiving regular and ongoing psychotherapy from not only his own psychologist‚ but also from prison psychologists and a social worker whose reports formed part of the parole decision process”.

Pistorius was sentenced last year to serve five years in prison for culpable homicide‚ for shooting his girlfriend Reeva Steenkamp in the early hours of Valentine's Day in 2013. He became eligible for parole after serving one-sixth of his sentence and had been expected to leave the Kgosi Mampuru prison in Pretoria in August.

His release was halted when Justice and Correctional Services Minister Michael Masutha opposed the decision by the parole board‚ and ordered a wider investigation by his department into the common practice by parole boards and correctional services of submitting applications up to six months ahead of the date upon which an inmate qualifies for parole.

Explaining the intervention‚ Masutha's spokesperson Mthunzi Mhaga said Pistorius had not served 10 months of his five-year jail term when the Correctional Supervision and Parole Review Board made the decision on June 5. “One sixth of a five years sentence is 10 months and at the time the decision was made Mr Pistorius had served only over six months of his sentence.” There was therefore no legal basis for his release‚ Mhaga said then.

Masuthu’s involvement was sparked by the Progressive Women's Movement of South Africa‚ which petitioned him to block the athlete's release and argued his release in Women’s Month would have been insensitive in a country battling gender violence. Its convenor‚ Jacqui Mofokeng‚ also of the ANC Women’s League‚ had supported June Steenkamp‚ Reeva’s mother‚ during the trial.

In their statement today‚ the Pistorius family said: “We had put our trust in the Correctional Services system‚ but are very disconcerted by the constant delays in obtaining clarity on this matter. We are concerned not only about the legality of the Parole Board's decision‚ but also about the fairness towards Oscar - and the many others - whose constitutional rights are being affected by the ongoing confusion around the timing of parole decisions”.

“When the Minister made his initial announcement‚ he was very clear that the petition by the Women's League had no legal substance‚ and that this was simply a procedural matter based on the Minister’s interpretation of the Correctional Services Act. Time has now cured this procedural issue‚ and we cannot understand why the Review Board failed to reconsider the matter as it is empowered to do‚ and why the matter is now to be referred back to the Parole Board that has no reason to make a different decision from the one that was made in the first place.”

The state is meanwhile preparing to appeal against Pistorius’s culpable homicide verdict next month‚ arguing that he should have been found guilty of murder. The trial judge‚ Thokozile Masipa‚ had not been convinced by the prosecution team that he intended to kill when he fired four shots into the toilet at his home‚ fearing an intruder had entered the Silver Lakes property.