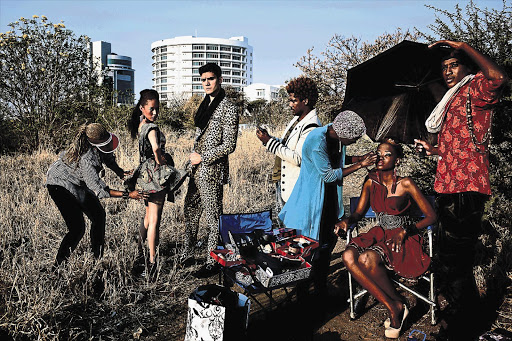 NIP AND TUCK: The team behind Black Trash, a leading fashion label in Botswana, shot on location at the Phakalane golf estate in Gaborone

In 2013 Per-Anders Pettersson's photographic book Rainbow Transit was selected as one of the books of the year by the British Journal of Photography.

Now Pettersson has released a new work, African Catwalk -based on fashion shows that take place in countries from Cape Town to Cairo.

Pettersson arrived in Cape Town in 1994, and stayed, after being sent to cover South Africa's first democratic election.

Since then he has documented the contradictions and difficulties experienced by African countries, but has never lost his optimistic outlook.

According to Vogue magazine, Pettersson watched his first fashion show in Johannesburg in 2009 and was impressed by and fascinated with the dynamism of the local fashion industry, which he saw as the effect and expression of more general economic and industrial growth.

In the seven succeeding years, the photographer has taken part in more than 40 fashion weeks across Africa, photographing catwalk shows in 15 countries. He has become a part of those local fashion scenes.

The result, says Francesca Marani of Vogue, ''is a work capable of challenging the stereotyped Western representation of Africa as a continent synonymous with wars, diseases, poverty and underdevelopment and capable, at the same time, of shedding light on the strong creative energy and the drive for innovation that can be felt everywhere".

Glaviano wrote: ''Africa is a complex continent, with thousands of facets and contradictions. Regrettably, the impression of Africa - as a result of the, at the very least, incomplete and at times entirely inaccurate representation provided by the media - has been for much too long merely one of a dark continent, a theatre of social issues, famine, wars, genocides and political corruption. For this reason, the work of Per-Anders Pettersson, focusing on creative talents and the rise of the African fashion industry - free of any prejudice or stereotype - becomes an important element in the process of the restoration of the erroneous perception of this amazing, multifaceted continent."