In Pictures: More rain predicted as Gauteng cleans up after ‘extreme rains’ 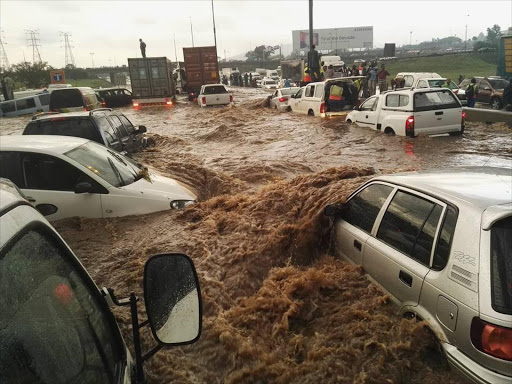 The Johannesburg Roads Agency moved to dismiss criticism that Wednesday’s flash flooding was due to blocked stormwater drains.

Instead‚ the company’s managing director‚ Dr Sean Phillips‚ on Thursday blamed the flooding‚ which left at least six dead‚ on “extreme rains”.

He told Radio 702 that Wednesday’s rainfall was “unusual” and that the system had been “overflooded” as it could not be designed to deal with the type of “one-in-50‚ one-in-100-year” storm that occurred.

Vehicles submerged, traffic at a standstill on R24 Westbound due to flash flooding. #JHBTrafficpic.twitter.com/wpA7LyLaJ0

Roads in Johannesburg‚ Ekurhuleni and Tshwane were obstructed on Thursday morning after being covered in mud and debris‚ while residents across the province cleared out flooded homes.

Traffic remained slow in and around Gillooly's interchange on Thursday where about 150 cars were affected by high water the day before.

Passengers faced possible delays at OR Tambo International Airport for a second day. Flights were cancelled because of the weather on Wednesday‚ and sections of the building and access roads around the airport were flooded.

Adding to the airport’s woes was a section of collapsed perimeter wall on its southern reach.

The inclement weather seems set to stay for the week‚ with heavy rains and storms predicted for Thursday.

See more pictures and videos from the storm:

People form lines to help those stranded on top of their cars by the heavy rains on 9 November 2016. Image: Twitter/@EMER_G_MED