Renowned prosecutor Gerrie Nel on Monday lashed out at the police service for allowing a police officer accused of killing his wife to work armed with a firearm. 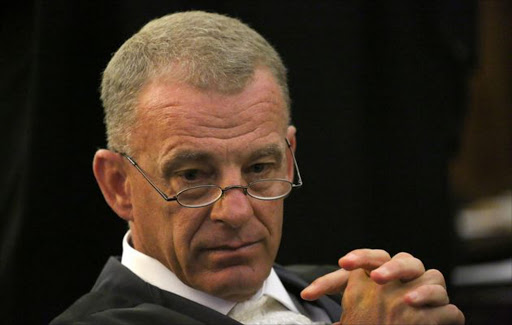 Gerrie Nel said he was astounded that someone accused of killing his wife with a firearm was given a firearm by the SAPS.
Image: SIPHIWE SIBEKO / POOL / EPA

Nel said he was astounded that someone accused of killing his wife with a firearm was given a firearm by the SAPS.

“The court's duty is to protect the public in general. An SAPS member not in suspension and carries a firearm daily. I am astounded that someone accused of killing his wife with a firearm is given a firearm by SAPS. I am unable to mitigate the risk of allowing an armed accused to interact with the public.

“This is the unreasonable delay by an armed accused who could have used a firearm to kill his wife in the bedroom of their house. I can't mitigate a person armed seven days a week‚ 24 hours a day‚ and ask for flimsy reasons to have his case postponed. In an event a postponement is granted I will argue against his bail‚” Nel said.

Nel told the packed High Court sitting in the Vereeniging Magistrate's Court that Sergeant Kennedy Fox‚ 35‚ was undermining the court.

Nel asked Judge Jacobus Strijdom to be strict and not allow Fox to delay the trial which was meant to begin on Monday.

This is after advocate Malefetsane Mokoena who was representing the accused asked for a postponement. Mokoena said Fox was more vulnerable and wants the matter to speedily proceed because he can't afford to have a cloud hanging over him.

Fox who is attached to the Vaal Rand Flying Squad‚ allegedly killed his wife Chë Fox‚ 27‚ at their home in Rustervaal in the Vaal on November 6 2014. The policeman allegedly shot her in the head and later went outside the house and fired through the window.

He allegedly claimed that his wife was shot and killed by an intruder who fired bullets through the window.

The case was postponed until Tuesday.