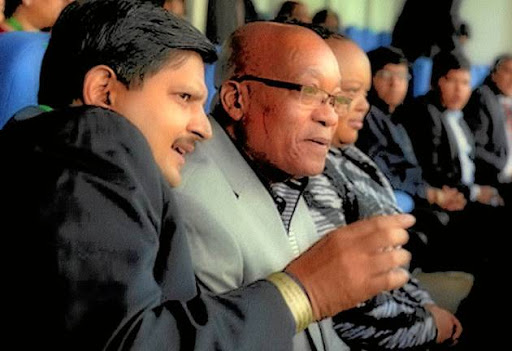 Atul Gupta and Jacob Zuma at a T20 match between South Africa and India at Wanderers Stadium in 2012.
Image: GCIS

The UK firm has been tweeting about last week's UK election and every time it tweets South Africans give the company some serious shade.

The firm‚ according to a leaked report‚ decided to use the "the white monopoly capital narrative" to turn media attention away the Guptas and their unwanted influence on running the SA government.

Bell Pottinger's campaign suggested economic and political problems of SA were because of a rich white minority.

Numerous fake twitter accounts were set up to promote this idea and use the phrase "white monopoly capital" to take attention away from South Africa's most notorious family. Bell Pottinger denied these claims and broke off its relationship with the Guptas in April.

South Africans won't let Bell Pottinger forget what they did.

The company tweeted a link to its analysis of the UK political parties' stance on housing.

In another tweet‚ it tweeted a picture of an event it was holding and the reply came: “Where are the Guptas?”

Noting the event in Britain was mostly attended by white people‚‏ @StantemUrsae said: “Looks very ‘white monopoly capital’ to me.”

1. In response to Bell Pottinger's tweet on the top ten lessons from the UK election‚ South African's came up with their own top ten lists - referring to people known to have links with the Guptas.

Bell Pottinger ‏tweeted: “Our #political team reveal their Ten Conclusions from the #ElectionResults.”

@pj_2010 said: “Is this different to the Ten Commandments? Your organisation is a uniquely evil one #GuptaEmails.”

@mjmopperman replied: “'We help ruin WHOLE countries. At the right price.' Is that your motto?”

3. Bell Pottinger‏ tweeted: “What next for #energy? Our #political team comment on the #climatechange debate and the investment landscape.”

@jules52‏ replied: “How about apologising for destabilising a young democracy?”

@colinreidza asked: “Any Zumas or guptas on your political team? [sic]”

4. Bell Pottinger‏ tweeted: “What does the #socialmedia battleground look like within the #GeneralElection and how much does it really matter?”

‏@Valleigh replied: “I can't believe the brazen tweeting about a platform you used to cause racial tension and division in South Africa #shameless.”

@ekogaia replied: “What are foreigners who destabilise a nation called? Mercenaries?”

@headheartlaw replied: “Would you interfere in British democracy? Is it ok to interfere in African countries?”