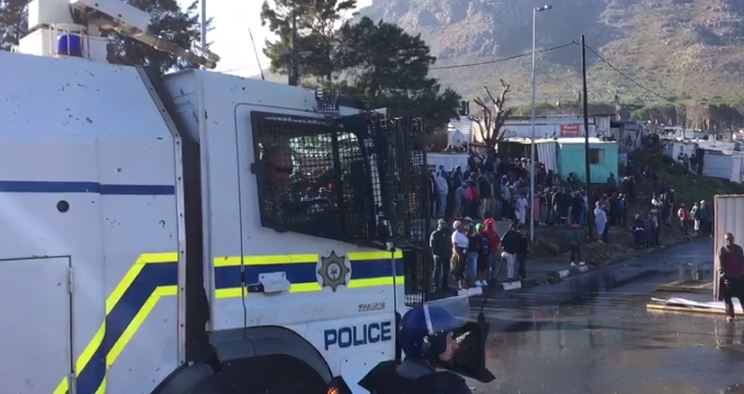 The city council and the police had sent water cannons to the area in a bid to defuse protests.
Image: Ruvan Boshoff

A 30-year-old man was shot in the chest as protests in Hout Bay turned violent on Monday.

Emergency Medical Services spokesman Robert Daniels said ambulances responding to the shooting were delayed by the fallout from protest action that has rocked the Cape Town community since Saturday.

“There was a delay in emergency services delivering care to the man because police were unable to escort the ambulance. There are tyres burning at the police station entrance‚” he said.

The shooting was confirmed by police and by JP Smith‚ the City of Cape Town mayoral committee member for safety and security. Asked if the man had been shot with a rubber bullet‚ Smith replied: “Apparently not.” No other details were available.

Earlier‚ disgruntled community members overturned vehicles and damaged a mobile kitchen. Officials were able to avert an attack on an old-age home. 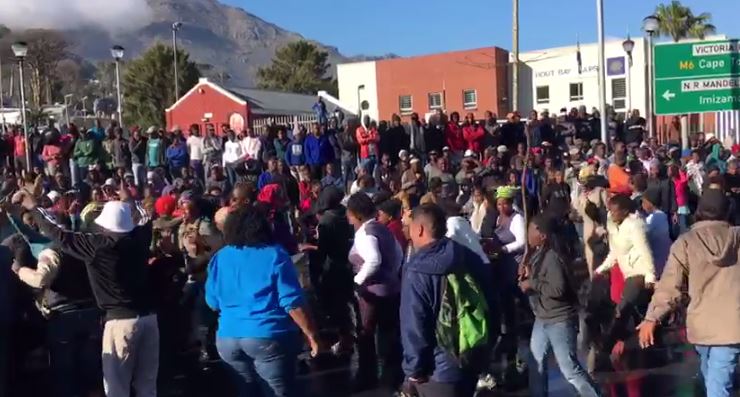 Said Smith: “The situation has become very serious and it is clear that it is no longer a matter of community protests but it has now entered the realm of sheer criminality.”

“The city’s law enforcement and disaster management mobile units‚ which were used as kitchens for the victims of the fire on the sports field‚ have been completely destroyed. The city has called on SAPS’s senior provincial leadership to intervene urgently and to ensure that arrests are made‚” said Smith.

Protests in Hout Bay intensified on Monday as disgruntled community members overturned vehicles, damaged property and barricaded roads. Imizamo Yethu residents are demanding that the city speed up the process of moving them back into the area after they were temporarily moved away following a devastating fire three months ago. Shot by: Farren Collins and Ruvan Boshoff Edited by: Olorato Mongale Subscribe to TimesLIVE here: https://www.youtube.com/user/TimesLive

The city council and the police had sent water cannons to the area in a bid to defuse protests which broke out on Saturday when shacks from the temporary settlement area built for victims of the Imizamo Yethu fire in March were used to block the only two roads into the town.

A large crowd gathered on Monday at the entrance to Imizamo Yethu‚ calling for mayor Patricia de Lille to address them. But De Lille said she would not enter talks with the community until criminality stopped.

Western Cape Health department spokeswoman Monique Johnstone said the community day centre also been closed. “Health staff are unable to access the facility due to road closures as a result of the protests in Hout Bay‚” said Johnstone.

“Staff members have been redeployed to assist at other healthcare centres in the southern area until the situation in Hout Bay has been managed. Alternative arrangements have been made and members of the public can access medical assistance at Retreat Community Health Centre.”