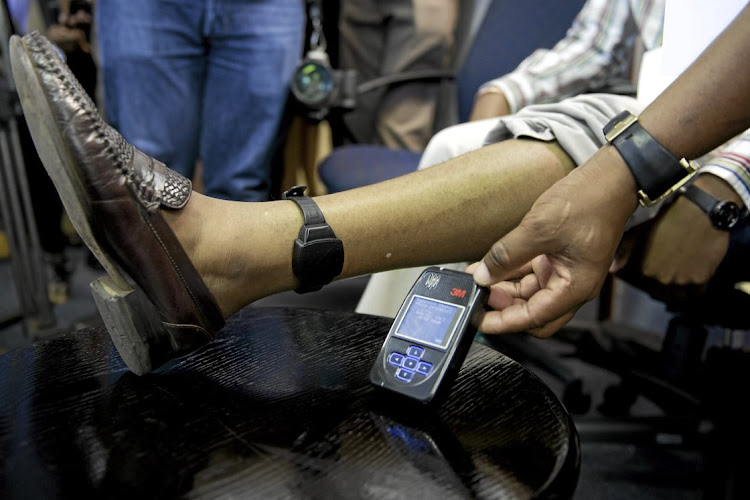 Nigel Lee Tucker is one of many awaiting-trial prisoners and parolees who wears an electronic tracking bracelet that is monitored 24/7. File Photo.
Image: Gallo Images

Alleged sex offender Nigel Lee Tucker may soon be forced to await his extradition trial date in the comfort of a Cape Town prison cell‚ rather than on his own couch.

Tucker‚ 52‚ a helicopter pilot and IT specialist‚ was arrested in March last year during a sting coordinated by the SAPS following an extradition request from the UK.

He fled to Cape Town around 2000 from Britain while out on bail and faces 42 charges relating to sexual offences involving boys under the age of 16 in his home country.

Tucker was convicted in absentia while on the run and successfully appealed the ruling. However‚ new charges were brought and three arrest warrants issued after other members of the child abuse ring were again found guilty in 2008.

Tucker is one of many awaiting-trial prisoners and parolees who‚ as part of bail conditions set by a magistrate‚ wears an electronic tracking bracelet that is monitored 24/7.

He and around 500 others who are monitored using the same system now face being put back in jail as a dispute rages on between the Department of Correctional Services (DCS) and Engineered System Solutions (ESS)‚ the company that provides the tracking service.

Alternatively‚ offenders like Tucker could escape justice if the tags are removed.

A company that provides GPS tracking devices to monitor over 500 prisoners is trying to stop the Department of Correctional Services from ...
News
4 years ago

Last week‚ DCS started de-tagging parolees and awaiting-trial prisoners‚ sparking an urgent legal bid by ESS to interdict DCS from continuing the process. The ESS application will be heard in the North Gauteng High Court in Pretoria on Tuesday.

ESS has argued that DCS will be putting the courts and the SAPS under severe strain by removing the tags.

Tucker’s attorney‚ Joseph Webber‚ has said that his client was contacted on Monday last week ago and told to report to the offices of the regional commissioner of DCS in Cape Town.

“My client was to appear before the president magistrate … who had initially set the bail and bail conditions in order for the state to consider the further position of my client once the electronic monitoring device (EMD) had been removed‚” Webber said in an affidavit attached to the urgent application.

“During discussions at court State Advocate C Burke informed me that he was not prepared to agree to our client remaining on bail after the EMD had been removed from his person‚ despite the other existing stringent bail conditions including 24 hours house arrest and reporting to his local police station three times a day seven days a week and that he would apply to the court for our client to be kept in custody immediately the EMD was removed.”

Webber requested that Tucker be allowed to join in the application to interdict DCS from removing the tag‚ citing financial losses that stemmed from previous periods of incarceration and house arrest. DCS spokesman Logan Maistry on Monday confirmed the department would be opposing the application but would not respond to further questions.

Prisoners 'will disappear' if tags are deactivated

A company that provides GPS tracking devices used to monitor the movements of more than 500 prisoners is trying to stop the Department of ...
News
4 years ago

Two Johannesburg prison warders allegedly sexually assaulted and manhandled an eight-year-old son of a prisoner who blew the whistle on their ...
News
4 years ago

Two Johannesburg prison warders allegedly sexually assaulted and manhandled the eight-year-old son of a prisoner who blew the whistle on their ...
News
4 years ago