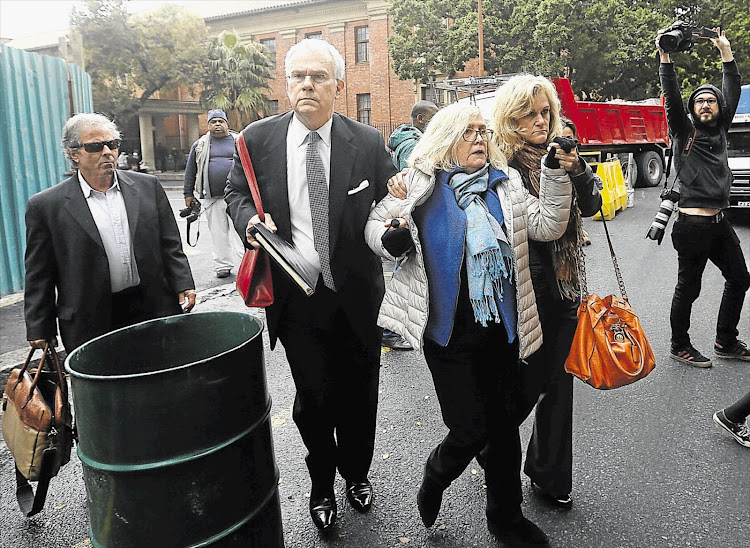 Family members of slain US businesswoman Gaby Alban leave the Cape Town Magistrate's Court after Diego Dougherty Novella made a brief appearance in connection with her murder.
Image: ESA ALEXANDER

Charles Moore is trapped in his own type of prison — the grief of losing his daughter‚ Lekita‚ at the hands of a serial killer.

“How can you forgive a guy like that who thinks nothing about others’ lives?” said Moore.

Also in the court is the case of Gaby Alban‚ murdered in a Camps Bay hotel in 2015. Her boyfriend‚ Diego Novella‚ is on trial for her murder and her father‚ Howdy Kabrins‚ has travelled to South Africa eight times to attend her trial.

He told TimesLIVE: “My heart is broken but my spirit is strong. I have had tears and rage. I have expressed my agony in my commitment to get justice for my daughter.”

Two weeks ago‚ Kabrins received a phone call from Fred Goldman‚ the father of Ron Goldman‚ who was murdered with Nicole Simpson in 1994‚ a case that led to the famous OJ Simpson murder trial.

“We are a part of a club that nobody wants to be in‚” said Kabrins.

According to experts‚ grief-stricken dads do not often express their emotions yet their pain is just as fierce as the mothers of murder victims.

Vernon Norton‚ grandfather of six-month-old Jordan‚ who was murdered in his Rondebosch East house in 2005‚ has encouraged dads of murder victims to express their emotions.

“How do you fix a society when you don’t know where it is broken?” he asked.

“I don’t think male grief should be invisible because‚ in my personal experience‚ such loss affects men in the same way it affects women. It doesn’t devalue your status as a man when you’re in touch with your emotions.”

For Vinod Hindocha‚ father of slain bride Anni Dewani‚ it was the gruelling but cathartic act of writing of a book that brought him to the coalface of his own pain.

Murdered bride Anni Dewani's father believes she "did not get justice in South Africa". He told the North London Coroner's Court yesterday that ...
News
5 years ago

The book was published in 2015‚ five years after Anni was shot dead while driving through the outskirts of Cape Town with her new husband‚ Shrien Dewani — later accused but acquitted of her killing.

“Although I felt relieved after penning my thoughts‚ writing this book wasn’t easy for me‚” he said in a statement. “I was shattered but broke down into tears several times.”

In October 2011‚ Sydney Mavata sat on the grassy embankment opposite his ex-wife’s house‚ where a white marquee awaited guests. Women from the community had gathered to prepare food for the funeral of his three-year-old son‚ Athenkosi “Lovey” Nkone‚ the victim of a Cape Town muti killing.

Lured into a neighbour’s house with sweets‚ he was later found dead in a suitcase with his throat slit. Mavata was one of the first on the scene‚ and fainted on the spot when the killer opened the suitcase.

He said he would be haunted for the rest of his life by seeing his son’s body.

Caroline Nkone, the mother of the Cape Town toddler who was butchered and stuffed into a suitcase, is still battling to come to terms with her loss. ...
News
9 years ago

In January 2014‚ Julius Hlanjwa’s life came crashing down after hearing that his daughter‚ nine-year-old Lihle‚ had been raped and set alight along the R300 near Delft.

She was found – barely alive – the next day‚ but told community members who had assaulted her. “He laughed while he did it‚” she said.

Hlanjwa kept a vigil for two months at her bedside at the Red Cross Children’s Hospital‚ but when she succumbed to her injuries his pain was palpable: he appeared in the media sobbing‚ his daughter’s pink necklace around his neck.

For each of these bereft fathers‚ there are countless others whose grief is hidden from the world.

Says American bereavement counsellor Mark Mercer‚ who writes for online resource The Grief Toolbox: “We almost never cry in front of other men. If we feel that a woman is ‘safe’‚ we may cry with her. But most of our tears are shed when we are alone.

“In all too many cases‚ our hot tears become a deep-freeze of anger or rage. Most very angry men are very sad men.”