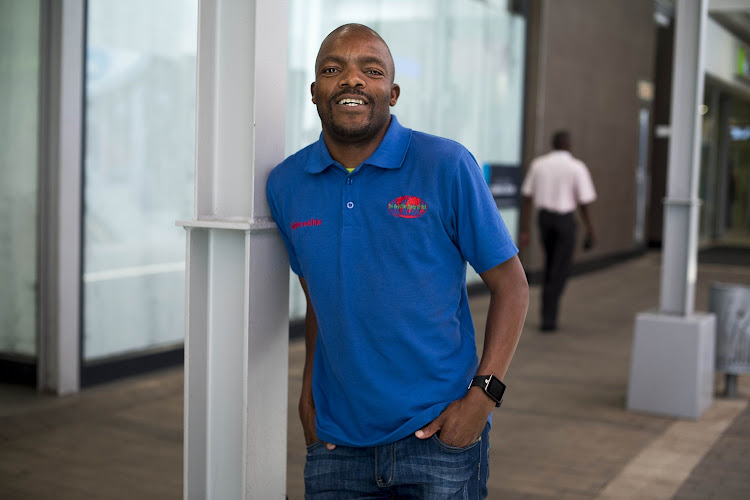 Siphiwe James Mngomezulu has lived an extraordinary life, from losing his family at the age of five and living on the streets of Johannesburg to being the director of 80D Albert Street Foundation in Newtown.
Image: Greg Roxburgh.

At the age of five‚ Siphiwe James Mngomezulu found himself all alone of the streets of Johannesburg. His most vivid memory from the time before then‚ is of a paramedic telling him to wait in the ambulance‚ after a freak accident in his place of birth‚ Swaziland.

He had just turned five‚ and his mother‚ who did not live with him‚ had come to Swaziland to celebrate his birthday on 24 December. He lived with his father in Elukwatini village.

He remembers that the celebration took place in a town‚ but on their way back home‚ the family had an accident that killed both his parents and left him an orphan.

Mngomezulu‚ 32‚ of Vosloorus‚ remembers that the paramedic told him that he wanted to go and help save his parents‚ so the child should wait in the ambulance while he did that. The paramedic did not have the courage to tell him what had really happened.

But not knowing what was happening around him‚ he panicked‚ and simply walked away from a scene without anyone seeing him.

“I was confused; a kid. I asked myself why these people were keeping me in this ambulance. I thought maybe I was being arrested.”

Mngomezulu simply walked away‚ and kept walking until he arrived at a place with buses loading passengers. He noticed that the Intercape bus had its luggage compartment open‚ and slipped inside.

“When I was inside‚ I just told myself that whatever happens‚ must just happen. I didn’t care what happened – all I wanted was to have peace. I still remember the comfort breaks that the bus would take‚ but nobody opened the luggage area until the bus arrived at Park Station. When they finally opened the luggage cabinet‚ I was able to get out without anyone seeing I had been there the entire journey‚” he told TimesLIVE.

At that time‚ Mngomezulu did not even know that he was in Johannesburg.

He began to wander around the station‚ until four young boys who lived on the streets noticed him. The boys took him to Albert Street‚ next to the Carlton Centre‚ where they lived. They gave him empty boxes to use as a bed.

The next day‚ the four boys took Mngomezulu to one of the off-ramps on the M2 South‚ and told him to beg for cash. They warned that when he came back to sleep‚ he had to bring R20‚ or else there would be no place for him.

He lived that life for two years. But when he was seven‚ a man came to preach the gospel to him. The man told the orphaned child and his friends that he was opening a home‚ called 80D Paradise for Street Children in Albert Street‚ Marshalltown.

It was only at that orphanage that Mngomezulu enjoyed his first hot meal in years. While staying at the home‚ he was able to go to school finally‚ at the age of seven. He remained at this home until he finished matric in 2003. By the time he reached matric‚ he was also a member of the Rhema Bible Church in Randburg.

In 2004‚ the Nelson Mandela Foundation took him to the USA to study community development practice. While he was in the US‚ an organisation called City Year South Africa was formed in 2005.

Without waiting to finish his studies‚ Mngomezulu came back to South Africa for the formation of this organisation‚ which provides after-school programmes that help children with mathematics‚ science and technology.

But another huge surprise awaited him. In 2006‚ he went to the old Natalspruit Hospital to visit disabled children‚ on an initiative organised by City Year South Africa.

“I went outside to buy something to eat‚ where I met an old lady who said that there was someone who looked like me at the hospital. I said to her‚ ‘No ways; I have no relatives in South Africa.’ She insisted I come with her to see the man who looked exactly like me.

“I saw the guy – he did look like me! I read his file – he was Sipho Johannes Mngomezulu. I realised that his mother’s name was the same as my mom’s name – this was my brother‚” he said.

The nurses told him to come back the next day‚ as visiting hours had elapsed. The next day‚ Mngomezulu went back to the hospital – but when he arrived‚ the man who resembled him was no longer in the bed. He had died the night before.

That was as close as Mngomezulu ever came to reuniting with a family member. He went to the mortuary‚ where he met the dead man’s girlfriend‚ who told him a story that corroborated his suspicions that this was his brother.

“It was painful‚ and I wanted answers‚” he says of his reaction to the emotional news.

He learned that his brother had been living with his girlfriend at the woman’s home. He then helped to bury his only close family member in Katlehong‚ where the woman lived. Unfortunately‚ the child that this woman had with the man he believes was his brother‚ a baby boy‚ died just two months after birth.

Mngomezulu then worked at an organisation involved in the 2010 World Cup‚ from 2007 till the end of the tournament. Next‚ he volunteered as a police reservist in Katlehong until 2013.

Mngomezulu has written a book entitled Vote For Our Land‚ For Our Children‚ aimed at educating the youth about building proper homes before having children.

In 2015‚ he founded the 80D Albert Street Foundation to encourage the youth to pursue careers. He does motivational talks in schools for Grades 11 and 12 in townships‚ and uses his relationship with the schools to link children from poor backgrounds to organisations that help with tertiary education funding.

Mngomezulu is also a member of the Revelation Church of God in Joubert Park. He is currently organising a careers exposition in partnership with Prophet Samuel Radebe‚ founder of the church.

The first career expo was held in October‚ for branches of the Revelation Church of God in the eastern region. This month’s expo in Johannesburg covers church branches in the south.

Mngomezulu’s vision is to take street children and link them to artisan schools‚ where they can learn the skills to earn a living. He said the schools have shown interest in his vision‚ but he does not have shelter where he can house the street children while they are attending classes.

“I felt that a lot of young people‚ when they have joined church‚ think that is all the life they can live‚” he told TimesLIVE‚ and he just wants to show orphaned children the many possibilities of a different life.

Mngomezulu has also called TV show Khumbul’ekhaya‚ trying to locate his family‚ but as the show only operates in South Africa‚ producers advised him to rather begin his search in Swaziland.

Last year‚ Mngomezulu went back to Elukwatini‚ to see if he could find his family‚ but he could not locate anyone related to him. “I asked people if they knew the Mngomezulu family‚ but they said they needed more specifics than that.”