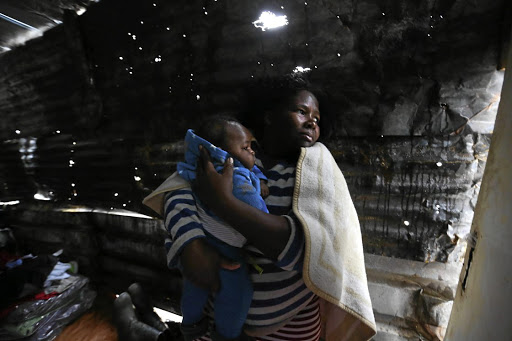 A WEEK FROM HELL: Siphokazi Mvumbi and her two-month-old son, Mnqubi, have been hit badly this week. A fire destroyed their home in Sydenham's Foreman Road informal settlement. Mvumbi has rebuilt her house, but has since had to contend with heavy rain that battered KwaZulu-Natal.
Image: Jackie Clausen

Riot police clashed with residents in Foreman Road informal settlement in Sydenham yesterday as tensions over a housing crisis worsened.

Hundreds of displaced shack-dwellers, left homeless after a fire swept through their settlement at the weekend, barricaded Clare Road in protest as a wave of cold and rain hit the province.

The protest, the shack dwellers claim, comes after eThekwini mayor Zandile Gumede reneged on a promise to provide building materials to those affected by the fire.

Seventy shacks were razed by the fire, which also left a two-year-old child and her father dead.

"She said she would come with the materials today and 15 minutes before she was to arrive I got a call to say she pulled out," he said.

The protestors retreated from their burning barricades as the police advanced.