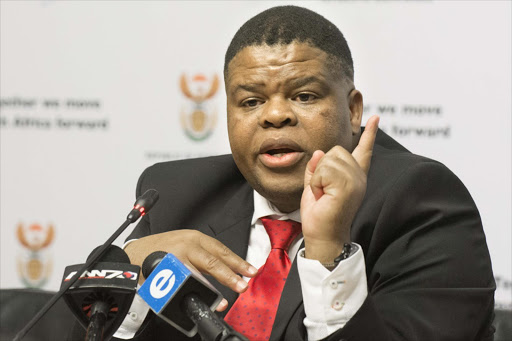 Energy Minister David Mahlobo indicated that there would be no further public participation on the contents of the Integrated Resource Plan (IRP) for electricity.
Image: Trevor Samson

A number of civil society organisations have expressed concern about not being involved in the hastily convened Energy Indaba‚ which began at the Gallagher Convention Centre on Thursday.

Greenpeace Africa‚ Groundwork‚ Earthlife Africa and the Centre for Environmental Rights said on Thursday morning they did not regard the Indaba as a legitimate process for the discussion of South Africa's energy future.

The organisations said the discussion should include members of civil society‚ particularly members of communities most affected by the pollution and harmful effects of electricity generation and labour.

Life After Coal Campaign and Greenpeace Africa met Energy Minister David Mahlobo on Tuesday‚ when he indicated to them that there would be no further public participation on the contents of the Integrated Resource Plan (IRP) for electricity‚ its approval by Cabinet‚ and its subsequent publication.

The IRP is the country's future roadmap for electricity planning and there has been conversation among interested parties about which energy sources - such as coal‚ nuclear and renewables - the country should adopt.

Mahlobo also told the organisations that the Energy Indaba was not intended to address the IRP in any way‚ shape or form – instead it was for business‚ labour‚ and government to discuss ways to reinvigorate the energy sector in order to stimulate economic growth.

The organisations said they regarded the consultation around the IRP as inadequate‚ and susceptible to legal challenge.

"The serious concerns that we have raised with the Minister remain‚ even after the meeting that was scheduled on 5 December 2017‚" the organisations said in a joint statement.

"We now await the publication of the IRP‚ following which we will decide the way forward‚ which may include further litigation."

SA is on code REDZ for energy needs

Solar panels and wind turbines have sprung up like wild flowers across South Africa and by 2030 will be clustered into renewable energy development ...
News
4 years ago

Solar panels and wind turbines have sprung up like wild flowers across South Africa and by 2030 will be clustered into renewable energy zones known ...
News
4 years ago