How Mogoeng’s fellow judges disagreed with him 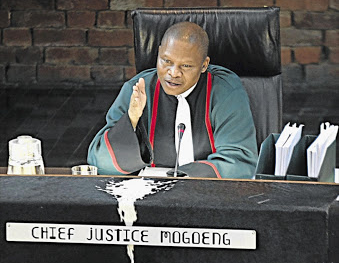 Chief Justice Mogoeng Mogoeng's scathing criticism of his fellow Constitutional Court judges' findings angered them so much‚ that one justice even wrote his own judgment just to tell the head judge off.

The highest court in the land on Friday found Parliament had not upheld its constitutional obligations‚ when it failed to determine whether Zuma should be removed from office‚ because of the Nkandla saga.

The case‚ brought by the Economic Freedom Fighters (EFF) and other political parties against the speaker of Parliament‚ led to some serious sparring between the judges in the court papers.

There are four judgments in the matter as the judges came to different conclusions‚ but there would have only been three - had it not been for the decision of Judge Johan Froneman to write a separate judgment to call out Mogoeng.

Tension between the judges was visible in court when Mogoeng interrupted Justice Chris Jafta as he was reading out the judgment and insisted his own words disagreeing with the main judgment be read into the record.

Parliament says it agrees with the strong reservations expressed by Chief Justice Mogoeng Mogoeng in his minority judgment but says it respects the ...
Politics
4 years ago

The main binding judgment tells Parliament to fix its impeachment rules and processes.

Mogoeng's lone judgment vehemently disagreed and then criticised the judgment as "a textbook case of judicial overreach… a constitutionally impermissible intrusion by the judiciary into the exclusive domain of Parliament”.

The Chief Justice is essentially accusing the court and his colleagues - the defenders of the Constitution - of overstepping their powers and breaching the Constitution by doing Parliament's job.

Mogoeng recognises that this extremely critical statement has "extraordinary nature and gravity".

A read through of the four judgments shows judges expect disagreement‚ but they take exception to Mogoeng's accusation.

In the majority judgment‚ Judge Jafta dedicated the last three paragraphs to Mogoeng's description calling it “misplaced and unfortunate”.

“Conceptually it is difficult to appreciate how the interpretation and application of a provision in the Constitution by a court may amount to judicial overreach‚” Jafta said.

Froneman wrote: "But for the first paragraph of the Chief Justice judgment‚ I would be content for my concurrence to be merely noted in the usual manner".

This means he would just agree with the majority judgment‚ but in this case he needs to write his own‚ as Mogoeng's comments "should not be left unanswered".

Froneman is not unhappy with the "robust debate" and disagreement between judges‚ which he says is the norm.

But he is extremely unhappy with Mogoeng's accusation that judges are essentially breaching the Constitution " in a textbook case of judicial overreach". Froneman criticised this comment as a label "that does nothing to further the debate".

He said the fact that judges have come to different conclusions about the Constitution's understanding of Parliament's duties is nothing more than "a serious attempt to grapple with the important constitutional issue at hand".

It is this unhappiness between judges that may have been the reason why Mogoeng interrupted his colleague Jafta's judgment on live television to ensure his words were read out.

Lawson Naidoo‚ executive secretary at the Council for the Advancement of the South African Constitution‚ told TimesLIVE: "I think it explains why Mogoeng was so insistent on his version read out. There was obviously tension in the court."